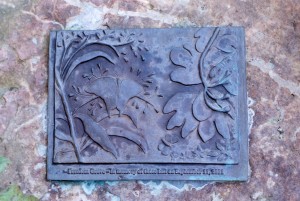 Flags in Virginia, as well as D.C. and Maryland, will fly at half staff today at the nation remembers Sept. 11, 2001.

It has been 13 years since the terrorist attacks that killed more than 3,000 people in New York City, at the Pentagon and in rural Pennsylvania, where an passengers brought down a hijacked airliner headed back to Washington.

Area commemorations began early this morning, with the unfurling of an American flag down the side of the Pentagon. The tradition began when firefighters did the same from the building’s roof on Sept. 12, 2001. The draped flag on the damaged building became a sign of America’s resolve.

There is not a formal remembrance here in Reston, but the Freedom Grove at Brown’s Chapel Park is always open for reflection.

Two Reston residents, Leonard Taylor and Norma Cruz Kahn, were passengers on American Airlines Flight 77 when it crashed into the Pentagon on Sept. 11.

The Reston community felt there was great need for a public space to remember, respect, and memorialize Taylor, Kahn, and the thousands of other victims of the 9/11 attacks. The Reston Association commissioned the project, and chose artist Kathy Walden Kaplan’s bronze sculptural relief as a marker for the spot.

Kaplan’s 8 x 11 inch sculpture is attached to a boulder at the park. It was dedicated in 2002.

A proposal to invest $250,000 to beautify and clean up Lake Anne plaza appears to be picking up steam. The Lake Anne of Reston Condominium Association (LARCA) has signaled its…

This is an opinion column by Del. Ken Plum (D), who represents Reston in Virginia’s House of Delegates. It does not reflect the opinion of Reston Now. A combination of…

This week’s Pet of the Week is Sensational Sage, a Shiba Inu mix whose tail can never stop wagging. Here’s what Safe Haven Puppy Rescue had to say about Sensational…

Peraton is moving its corporate headquarters from Worldgate Drive in Herndon to Reston Town Center. The 19,000-employee company has around 5,000 workers in the D.C. area, and its new space…