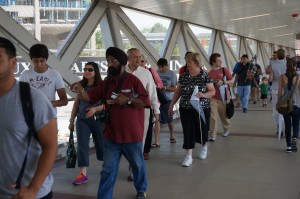 Wiehle-Reston East has 8,400 boardings (or 16,800 weekday entries and exits), Metro says. When planning the Silver Line, 8,244 boardings were expected after one-year of service, a Metro spokesman said.

Wiehe-Reston East also the only Silver Line station with significant parking. There are 2,300 spots in the Fairfax County-owned garage, as well as 1,000 more in the Comstock-owned part of the garage. Additionally, there is a 200-space bike room.

The Wiehle-Reston East numbers have been up around 17,000 daily trips since it opened July 26.

In total, the Silver Line is already performing at 60 percent of its projected ridership for the end of the first full year of service. As of last week, an average of 15,000 riders are entering the system at the five new Silver Line stations on weekdays for a combined 30,000 trips to or from the new stations. Metro said.

Before the line opened, Metro had estimated that Silver Line ridership was expected to reach 25,000 boardings at the five new stations after the first full year of service.Metro estimates that the Silver Line is currently adding about 6,000 new riders — making roughly 12,000 trips — to the Metro system each weekday. The rest, about 9,000 riders, are primarily former Orange Line riders who have switched to the Silver Line.

Tysons Corner Station is one of the few stations on the Metrorail system where ridership is higher on Saturday than weekdays. The station is the second-busiest new station on weekdays with about 5,300 entries and exits, but Saturday’s ridership is higher — partly due to people riding to Tysons Corner Center for weekend entertainment and shopping. Last Saturday, there were 7,449 entries and exits at the station.