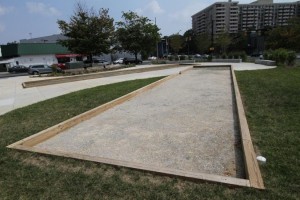 Residents of three clusters close to Cabots Point Recreation Area have said a planned bocce court there will bring trash, parking issues, and ruin the atmosphere of a child-friendly park.

At last week’s Reston Association Board meeting, one neighbor told the board — which approved South Lakes Director Richard Chew’s proposal for a 60-by-12-foot court last December — that the court would “ruin the lives” of children who play at Cabots Point.

Some Reston Residents are also peeved that the plan was approved without adequate notification to affected parties in South Bay, Cabots Point and Cedar Cover clusters.

It turns out bocce, Italian-style lawn bowling, has raised the blood pressure of residents in other communities too.

In 2012, a proposal for bocce in Arlington’s Bluemont neighborhood led to acrimonious emails, emergency meetings and the resignations of several board members of the Bluemont Civic Association.

The issues sound familiar to the ones voiced by Reston residents.

“There were and continue to be significant concerns from neighbors at large and adjacent to the sites” for the proposed court, Bluemont resident and bocce opponent Maura Quinn told ARLnow.com in 2012.

“Parking, trash, noise, lack of restroom facilities, and proximity to homes were all brought up over many months at BCA meetings,” she said at the time. “Many also believe that a cinder Bocce Court will cause significant dust/grime issues and will be unsightly in what is now lovely green space. There are Bocce leagues that play on grass throughout Arlington County calling into question the need for tearing out green space and replacing it with cinder.”

The Arlington County Parks Department’s response was that parking wasn’t an issue because most players would walk to the 13-by-50-foot court; that restrooms would not be needed because the park would not have more than 150 visitors at a time; that litter increase would be minimal; and that a public park should be open to the public for a variety of activities.

In the end, though, the parks department shelved the idea for Bluemont Junction Park in May of 2103, when it was deemed other sites would be more suitable. The county also did not think enough money would cover the costs — a $15,000 grant was available, but estimates for the project came in at $17,600 and $25,500.

The Reston project is estimated to cost $2,500, to be paid for by the non-profit Friends of Reston.

Even without the Bluemont court, bocce is alive and well in Arlington, where two courts opened in September 2013 in Ballston and bocce is available in a multi-use space in the Courthouse area. There are also two turf courts at La Tagliatella restaurant in Clarendon and bocce courts at Mosaic Park on Pollard Street.

The latter is the site of the DC Bocce League’s Arlington Division, which opens its season Wednesday night.