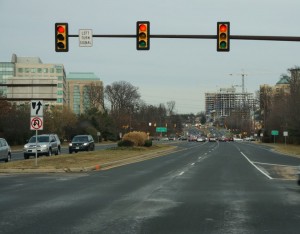 Development-watcher group Reston 2020 says it is concerned about planned improvements for connectivity in Reston — at the expense of motorists.

In a letter to Richard Lambert of Fairfax County’s Department of Planning and Zoning, Reston 2020 says that autos will still rule in Reston. So whether we are transit-oriented in the future, we still need to accommodate more cars on the road.

The county should start by ensuring that developer proffers should help pay for widening of Reston Parkway to ease future traffic flow, Reston 2020 says.

The lengthy letter comes in response to the Reston Master Plan Phase II “Strawman Draft” released by the county a few weeks ago. The county is taking feedback from citizens and citizen groups as it organized the comprehensive plan for Reston’s village centers and neighborhoods.

We are enthusiastic about improved connectivity in Reston, especially for pedestrians and bicyclists, but not at the expense of vehicular traffic.

Automobiles will remain the predominant mode of transportation in Reston, especially in its suburban areas, and even the plans for expanded bus service will mean the greater use of Reston’s roadways.

Moreover, the planned addition of some 50,000 people to the TSAs [transit station areas] and the potential addition of several thousand new residents to the village centers means there will be more vehicular traffic.

We would put special emphasis on key north-south roadways that, in our view, received short shrift in the Phase 1 effort. Much of the traffic generated in Reston, including some commuting traffic, involves people moving from the north to south or vice versa suburban (Phase 2) areas of our community.

In particular, as part of the proffer process,we would ask again that Reston Parkway (including the corridor overpass) be expanded to three through lanes all the way north to Baron Cameron Avenue and south to Glade, about one-mile from the Town Center Metro station in each direction, to facilitate the movement of traffic to, from, and through the Town Center TSA.

The standing County approvals for the 23-story Town Center Office Building and the 10-12-story mixed-use Spectrum Center, both outside the half-mile walkability circle, highlight the relatively urgent need for the road’s expansion north of the corridor.

The choking of suburban traffic will only hurt the development of both the TSA and suburban Reston. In addition to ensuring that connectivity does not come at the expense of vehicular traffic, we have proposed stronger language to help ensure that any traffic impacts caused by redevelopment are mitigated by developers.

The plan must at least sustain the existing level of service (LOS) for Restoniansin the Phase 2 study area, including accommodations for TSA residents to drive in the suburban areas of Reston to a school, park, preferred supermarket or other retail outlet, and even their place of work beyond suburban Reston.

See the entire letter and markup of the Master Plan draft text on Reston 2020’s website.