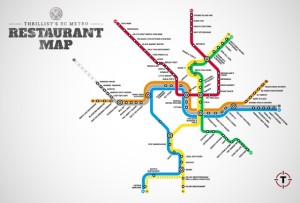 Thrillist, a travel and restaurant site, issued its first DC Metro Restaurant Map on Wednesday. The map picks a restaurant “within a couple of miles, but often much closer,” for every Metro stop on D.C.’s entire Metrorail system.

Late last week, we gave Mandoohouse a try. We liked it, with some caveats, as its former self, Myknonos. As Mandoohouse, a Greek/Korean mashup? Not so much. At 7 p.m. on a Friday night we were the only customers, and they still were not ready for us. They were out of one menu item we ordered, and the rest of the meal was just OK.

Mandhoohouse, at 1810 Michael Faraday Dr., is most likely the closest restaurant to the station, not counting McTaco Hut, which was also pretty snarkily touted in City Paper last summer.

So, should Mandoohouse be the pick to ride alongside Tysons Corner’s Nostos and America East Tavern and DC’s Little Serow and Central Michel Richard?

Is there somewhere else in the vicinity of South Reston that is more deserving to represent? Tell us in the comments.