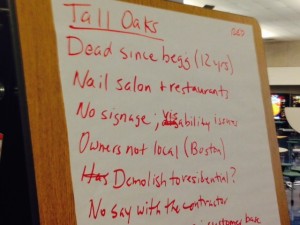 In the early 1960s, Reston founder Bob Simon and other planners got to work on what the community should look like — including village centers that would serve as the commercial and social hub of each of Reston’s villages.

What ended up serving Reston were essentially suburban shopping centers, heavy on parking spots and light on common areas.

With the second phase of Reston Master Plan up for review, might it be time to revisit the original ideals and work into the comprehensive plan the ability, should a developer want to do so, to revamp the village centers?

That was the main question posed by Fairfax County planners and Hunter Mill Supervisor Cathy Hudgins to participants who came to South Lakes High School Saturday to talk about the future of Reston’s Village Centers.

The village centers served as the model of Simon’s planning, said Hudgins.

“Some have survived over the years, some have not,” she said. “So this text is important — how do you trigger change? It may not happen in short time frame, but we want to be able to get this input on how the community thinks it should move forward.”

Fairfax County planning staff said Saturday they hope to have the final document drafted by mid-2015. But changes could be decades away, if ever.

Whatever changes are incorporated into the plan will not be a regulatory document and any structural changes will have to eventually go through the Reston Association’s Design Review Board, as well as county planning and zoning and the Board of Supervisors.

Citizens in attendance Saturday split up into discussion groups, where they did a rundown of the best and worst parts of the village centers.

The consensus seemed to be:

Residents suggested that if future development were to occur, it would have to be built up into mixed-use residential with retail on the ground floor and hidden parking.

The center that got universal concern was Tall Oaks — which has been losing businesses rapidly (with no new ones opening in recent years). Perhaps Tall Oaks future lies in something else that does not feature retail?

Some of the Tall Oaks issues that came up in discussions: disengaged ownership;  low density surrounding the center; poor access and signage; and a wooded buffer along Wiehle Avenue that is RA land.

“Tall Oaks would be a good one to start over and rethink,” said Connie Hartke, an active Reston Citizens Association member who was presenting her table’s views to the rest in attendance. “Maybe it needs some completely new thinking about what can be done with that space.”

Bill Penniman, Reston Community Center board member who was speaking for his table, said all the centers should take advantage of unique features surrounding it, such as the lake at South Lakes, woods at Tall Oaks, and a visible gathering space between Hunters Woods and the RCC.

Citizens are welcome to send Fairfax County feedback on the village centers through the Reston Master Plan website.