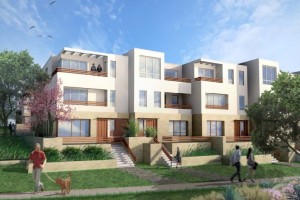 These are some of the features of Lake Anne Development’s Partners’ plans for a revitalized Crescent Apartments and surrounding areas near Lake Anne. The plans were approved in concept by Reston Association’s Design Review Board on Tuesday.

That means the basic plans have passed the first steps toward redevelopment. It will still need to go back to the DRB, as well as Fairfax County officials, for more discussion before the many projects get underway.

LADP has been working on its vision for a revitalized Lake Anne since summer 2013, when it was selected by Fairfax County through a Request for Proposals (RFP) process.

Historic designation prevents big changes to the retail and residential components of Lake Anne plaza. The plaza currently has a number of empty stores, but Lake Anne residents and business owners say they are hopeful added density will aid in a renewed retail atmosphere at Lake Anne.

The parking garage will be built on a swath of land that the developer acquired last year in a land swap. In the deal, Reston Association’s board trading an acre of RA’s land at Lake Anne for a parcel along Baron Cameron Avenue, as well as financial incentives and improvements.

END_OF_DOCUMENT_TOKEN_TO_BE_REPLACED

More Stories
Just Listed in RestonThanks to Our Sponsors and Advertisers