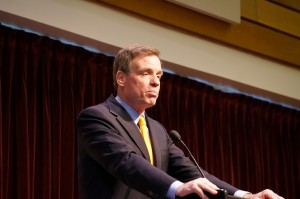 The Mark Warner (D) campaign has declared victory in the Virginia race for U.S. Senate, however challenger Ed Gillespie has not yet conceded the race.

As of 10 a.m. Wednesday, Warner had 49.11 percent of the vote over Gillespie’s 48.34 percent, according to the Virginia Board of Elections.

The Warner campaign will hold a noon press conference to discuss a possible recount, which is allowed under Virginia law if the margin is less than 1 percent.

Canvassing to check votes began early this morning at the Fairfax County Government Center. A recount could happen if the trailing candidate requests it. If the margin of votes is less than half a percent of the total vote, the candidate can appeal to the State Board of Elections to request a recount, which the government will finance. If the margin is greater than 0.5 percent but less than one percent of total vote, the candidate may also request a recount, but has to pay for himself.

The Virginia race was a surprisingly close one. It looks to end with Democratic incumbent Warner bucking the Republican tide that enabled the GOP to take control of the Senate.

This story will be updated as vote tallies become official.

END_OF_DOCUMENT_TOKEN_TO_BE_REPLACED

More Stories
Connolly Thanks Voters ‘For Placing Your Trust in Me Once Again’Election 2014: How Reston Voted