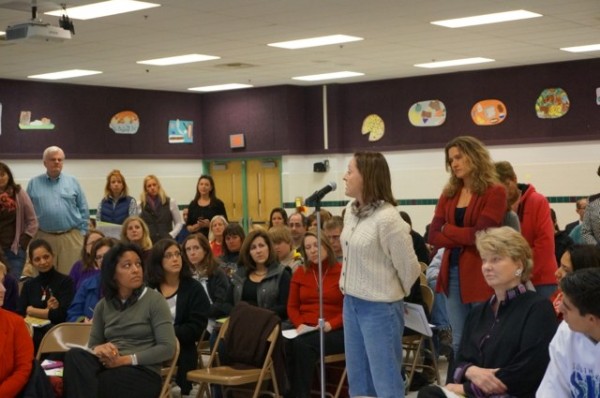 What she found was a packed house at Hunters Woods Elementary School and more than 30 parents ready to speak out on issues ranging from class size to special needs to cyberbullying.

The five-stop listening tour is key part of outreach as FCPS prepares for what might be a brutal budget cycle, said Garza.

Continued growth — the district grows by 17 to 20 students a day, she said — hiring needs and class sizes will continue to be a challenge. So will compensating current teachers and adding to the retirement funds without cutting student services, said Garza 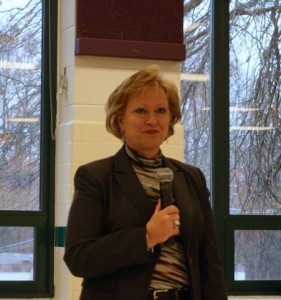 “When we look at our capital improvement dollars, which are quite limited, we can’t stretch them far enough. Teacher salaries: I am not happy with where we are. By comparison, when you look at a 10-year teacher, there are only two area systems lower than we are. The two things I mentioned are two significant parts of the budget. Eighty-eight percent of our budget is personnel cost.”

“Those are real people who ordinarily would have been serving children,” she said. “Our demands are increasing and our resources are decreasing.”

More than two dozen community members lined up to speak to Garza. While they spoke on a wide range of subjects, there were a few themes that ran through the conversations.

Class size. With class sizes creeping up close to or above 30 students, many parents have concerns.

“This is a major, major issue” said a mom with children at Reston’s Aldrin Elementary School. “My daughter’s math class is 36. Teachers have gone above and beyond the call of duty. At some point, they are going to be tapped out and can only go so far.”

Said another Aldrin parent:  “How are you going to have project-based learning in classrooms with the poor teacher trying to manage 35 kids? The system needs to focus on basics — reasonable class with 26 to 28 at most.”

Garza said she is aware of and concerned about the class size issue.

“I am not happy with where we are right now,” she said. “We will get better. We have been plagued with high class sizes in this area for a number of years now.”

Special needs. Comments ranged from dissatisfaction from the way FCPS identifies dyslexia to inclusion for students on the autism spectrum to the growing number of English as a Second Language students, many of whom are entering the system with no English as well as little formal schooling.

“The problem is their skills are so limited and they are really excited to learn English,” said one parent, who is also a school employee. “The classes don’t teach them English schools to communicate with others. So they give up. And then the kids start to misbehave.”

Concern over mental health. In the first semester of this school year, South Lakes High School has had a suicide, a gun threat over social media, and an episode of cyberbullying that concerned several parents at Saturday’s meeting.

“The cyberbullying incident — it did happen to my daughter —  but it has broader implications for all the SLHS students,” said Kris Rose, the parent of a 10th grader. Rose said she got little support when she brought the incident to school officials.

“There was a Twitter account set up to bully all the children at SLHS,” she said. “Telling children to kill themselves; saying hate speech at children of parents who were gay. In my estimation it broke laws. I will not have it on my conscious that anyone at SLHS will be hurt.”

The bully eventually stopped, but another parent still calls the atmosphere at SLHS ” a powder keg.”

“Mental health is not being handled,” said Teri Cochrane, parent of a current SLHS student as well as a 2012 graduate. “The way the the suicide was handled was very insensitive. There was a report of a student lacing Starbust with acid. The gun incident. They were all handled poorly. The kids used to support one another. That came from great leadership. That has completely shifted. I do not want South Lakes to be on the national news. This needs to stop immediately.”

“When I went to high school we did not have anything like we have now,” she said. “Now, kids are connected all the time. We are developing some training for parents and students, on ethics, on how to use technology appropriately.”

She added that the schools want to partner with Crimestoppers and be in position to offer rewards for tips students who threaten schools and other students.

“Guess what?” she said. “Students will, especially when there there is money.”

She added that parents need to help the schools by monitoring their student’s different devices frequently.