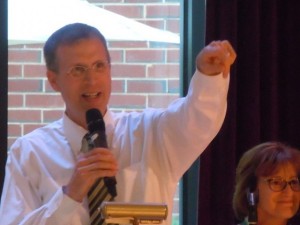 Butler was principal at South Lakes High School from 2005 to 2012. Prior to that he was an assistant principal at SLHS for seven years.

In 2012, Butler retired after 31 years in the school system.

Butler was a fixture in the halls of SLHS and at extracurricular activities. He also saw the school through a multimillion dollar renovation and sometimes contentious redistricting battle.

The school population grew to more than 2,100 students during Butler’s tenure, and test scores and achievement also rose.

South Lakes gives out a Bruce Butler Leadership Award each spring to a graduating senior who shows outstanding leadership, scholarship and service.