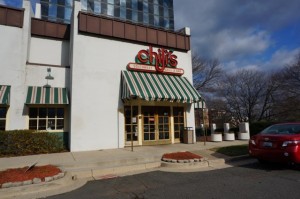 Chili’s Bar and Grill will be closing its Reston location sooner than expected, a store spokesman has confirmed.

Chili’s has been in its spot near the International Center for more than 20 years. However, that whole area is slated for a major redevelopment.

Developer JBG has not said when redevelopment is slated to begin. A Wells Fargo branch closed in August and sits empty as well.

The rest of the small strip mall retail is slated to be torn down as part of the redevelopment. Only the Exxon station and free-standing Popeyes restaurant are slated to remain.