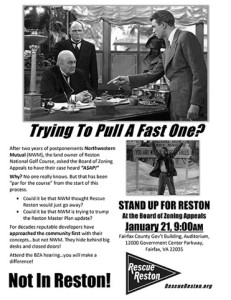 Opponents of rezoning and redevelopment at Reston National Golf Course are gearing up for another round.

After 18 months of relative quiet, RN Golf (a subsidiary of Northwestern Mutual) is again preparing for a Fairfax County’s Board of Zoning Appeals hearing on reclassifying the 166-acre public golf course as something other than open recreational space.

The hearing is Jan. 21 at 9 a.m. at the Fairfax County Government Center.

Rescue Reston, the grassroots group formed when the golf course rezoning issue first came up in the summer of 2012, is hard at work rallying opposition to rezoning.

On its website, the group has a countdown clock to the number of days, hours and minutes to the BZA hearing. It has distributed Christmas-themed flyers portraying Northwestern Mutual as both the ghost of Christmas past and Scrooge, as well as the developers of “Pottersville” — the darker, drunker alternate reality of Jimmy Stewart’s Bedford Falls in It’s a Wonderful Life.

“Northwestern Mutual has launched the most serious attack on the heritage of Reston we have witnessed in the 37 years we have lived here,” Reston Rescue founder John Pinkman wrote to golf course-area neighbors recently.

“If this destruction of open space and the concept of the planned community is allowed to proceed, the door will be open for extreme change in neighborhoods throughout Reston. NWM HAS NO COMMITMENT TO THE COMMUNITY; except that is, to make as much profit as they can and then leave.”

To generate community support for the upcoming BZA Hearing, Rescue Reston has planned a Rally to Save open space for Jan. 10 at 2 p.m. at Langston Hughes Middle School. The group hopes as many residents as possible will attend the Jan. 21 hearing to show their support.

The group held rallies back in 2012, when RN Golf first filed the appeal with the county after an original inquiry came back that the course was zoned open space and to change it, the owners could have to go through the rezoning process.

RN Golf has asked for the appeal because it wants to be able to rezone without going through the process.

The BZA hearing was postponed about a half dozen times in 2012 and 2013 before RN Golf deferred it indefinitely in July 2013.

Since then, the Reston Master Plan Comprehensive Amendment, approved by the Fairfax County Board of Supervisors in 2014, states the two Reston golf courses should remain as community assets in the face of nearby development.

Both Hunter Mill Supervisor Cathy Hudgins and Reston Association have spoken in opposition to the rezoning.

RA says it would even consider purchasing the land to prevent development.

“It is RA’s stance that these golf courses are integral to the active lifestyle of its members,”  RA president Ken Knueven said in November when the new hearing date was announced.