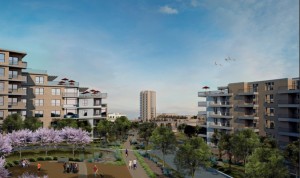 The Fairfax County Board of Supervisors gave final approval on Tuesday to Lake Anne Development Partners’ project to revitalize Crescent Apartments and the Lake Anne area.

“Lake Anne redevelopment has been a very long long process,” Hunter Mill Supervisor Cathy Hudgins said when introducing the motions for decision at the board’s meeting. “I am pleased today to reach a conclusion.”

The public hearing portion of the meeting was held Feb. 17.

The final approval sets the stage for Lake Anne Development Partners to start the project, which they hope will add density and transform Reston’s oldest area.

Stacy Hornstein, senior vice president and director of acquisition and development for Republic Land Development, an LADP partner, said they hope to break ground in early 2016.

“Lake Anne Development Partners is very excited that the Board of Supervisors approved the plan for redevelopment of the Crescent Apartments and the revitalization Lake Anne,” said Hornstein. “A project of this magnitude requires the expertise and assistance of many county departments, individuals and our team members. It is through their diligent efforts that we have reached this first of many milestones to come.”

The project is slated to add more than 1,000 apartments and townhouses, mostly where the 181-unit, county owned Crescent Apartments stands today. LADP’s plan also calls for 78,000 square feet of office space and 58,000 square feet of retail space, a modest-sized grocery store and realignment of Village Road. The project will also have a 1.1-acre central park, an outdoor amphitheater, a bike share station and 12 public art works, according to the project’s county staff report.

The interior section of Lake Anne Plaza, Reston’s original village center, has historic designation and will not be altered. However, developers hope the increased density and revitalization of the surrounding area will draw retailers and people to the plaza. The entire project will take about a dozen years to complete. The project was recommended for approval earlier this year by the Fairfax County Planning Commission. As part of its agreement with the county, Lake Anne Development Partners must provide 185 replacement affordable apartments and designate 20 percent of the other units as affordable and workforce housing.

Springfield Supervisor Pat Herrity was the lone dissenting vote among the supervisors, saying Tuesday that he was concerned about large numbers of affordable housing’s impact on Reston schools.

LADP was chosen by the county in 2013 to redevelop the aging Crescent Apartments, which was purchased by the county for $49.5 million in 2006 for use as affordable housing.

Some of the development conditions voted on at Tuesday’s meeting:

A reduction in parking. LADP requested to reduce by nearly 500(18 percent) the number of parking spots in the Crescent area.

LADP says Crescent redevelopment is being planned in a more urban style, so it should not have to meet suburban standards and that the project has proffered a comprehensive transportation plan with specific goals and strategies targeted to reduce auto ownership among future residents as well as reducing parking supply.

The project has proffered an overall 25-percent trip reduction goal for the resident and office users, which corresponds to a strategy that reduces the parking supply, according to county documents. There will still be 2,167 total spaces when the project is fully developed, says LADP.

That includes hundreds of garage spaces for Crescent residents and a 120-space parking garage to be built on a parcel of land adjacent to the current Lake Anne Plaza. That land, formerly owned by Reston Association, was the subject of a controversial land swap in late 2013.

Land issues. The Supervisors voted on the agreement for the 99-year ground lease by the county of the site for the replacement affordable units; the conveyance of the remaining approximately 1.2 acre portion of County owned land to Reston Association, who will in turn convey approximately 1.04 acres of adjacent land to LADP to facilitate the project (this is the final ruling on the 2013 land swap). Read more specifics in the Supervisors Agenda Package.