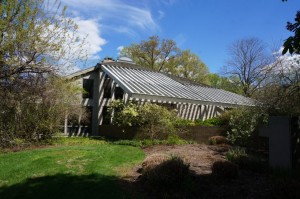 This is an op-ed by Reston resident Ed Abbott. The opinions expressed here do not represent the views of Reston Now.

I am a lay member of the Design Review Board (DRB). I have been a member for about five and a half years. My views presented here are my own. My term was up last month and I am not seeking another term.

Much has been written for and against the Reston Association (RA) decision to purchase the Tetra property. Terry Maynard has provided the most comprehensive and compelling analysis of that decision.

Essentially, the RA Board desires to purchase the property to save open space and prevent commercial development of a building, which would allegedly be a restaurant. The question is whether or not it is worth paying $2.65 million for a property that is valued at best at $1.4 million to prevent its commercial use. In my judgment, it is not.

I think one reason is that the Design Review Board is very unlikely to approve of the property’s commercial use, especially as a restaurant. Such development would significantly change the residential nature and aesthetics of the neighborhood.

During my time as a DRB member, I have seen numerous applications which would have had an impact similar to the potential commercial development of Tetra property that have been disapproved or required to undertake significant rework.

For example, the DRB disapproved the construction of several cell towers and required significant changes to the development that would replace the current Fairways Apartments. The latter apparently were significant enough for the developer to postpone construction indefinitely.

The DRB is tasked with assuring all applications are consistent with Reston’s Design Guidelines. This often requires the Board to apply the intent of the guidelines to the specifics of the application. As part of that process, the DRB takes input from the public. In fact, it is required to do so if a neighbor protests. The DRB heard from such “affected parties” in both the cell tower application and the Fairways project.

For any future owner of the property, including RA, threading Reston’s design guideline needle in the application process would be extremely difficult, if not impossible, given the property’s location.

It makes no sense to spend $2.65 million to prevent development that is very unlikely to happen. At best, the RA purchase of the Tetra property may prevent a very unlikely unwanted development from occurring, but at an exorbitant cost. At worst, RA may be stuck with an overpriced useless building.

The only sensible outcome is to let the current owner deal with this “white elephant” and not make it RA’s.