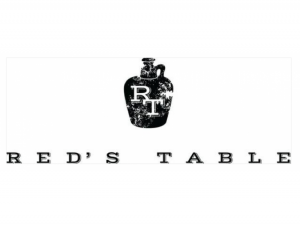 The owners of Red’s Table, the restaurant planned for South Lakes Village Center, say they are now on track to open in August.

The project has been in the works since early 2014, when brother Ryan, Matt and Pat Tracy took over the old Lakeside Inn space at South Lakes.

They originally planned to open by February or March, but construction issues — including a roof structural defect that meant the whole roof had to be replaced — set back the timetable.

The trio, who grew up in Reston and graduation from South Lakes High School, were already deep in the renovation and hiring process when the roof problem was discovered, Ryan Tracy said.

Inside, construction crews have rid the space of all things Lakeside Inn (which seemingly had not been remodeled in its 22-year existence). The interior, still in construction mode, is taking shape around an open kitchen.

The restaurant, named after the brothers’ grandfather William “Red” Tracy, will focus on New American food, with an emphasis on great steaks, seafood and fresh food. Red’s Table plans to offer $1 oysters at happy hour.

The restaurant is still hiring, and is particularly looking for a sous chef and a baker. If interested, email [email protected].