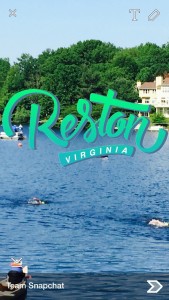 There is another way to create a sense of place in Reston: On Snapchat.

Reston now has its own Snapchat geofilter. Users of the photo social media site can imprint their photos with a postcard-like “Reston, Virginia” logo.

Geofilters are special overlays for Snaps that can only be accessed in certain locations, therefore the Reston geofilter will only work if you are in Reston.

Snapchat, which has about 100 million daily users (most of them under age 35) recently began allowing local designers to create a geofilter design, which Snapchat staff then approves.

The Reston Geofilter was created by Reston resident Collin O’Brien. Here’s what O’Brien said to the Snapchat folks in submitting his design:

“Growing up in Reston, I have seen the transition from a small town to a booming and populated city. Money magazine ranked Reston as the No. 10 best place to live in the USA in 2014.  Known for its lakes, golf, ice skating and walking trails, Reston is only growing, as a new Metrorail system has been extended to our city.”

“The green represents Reston’s nature, wildlife and plant life,” he said. “The blue represents the different bodies of water/lakes.”