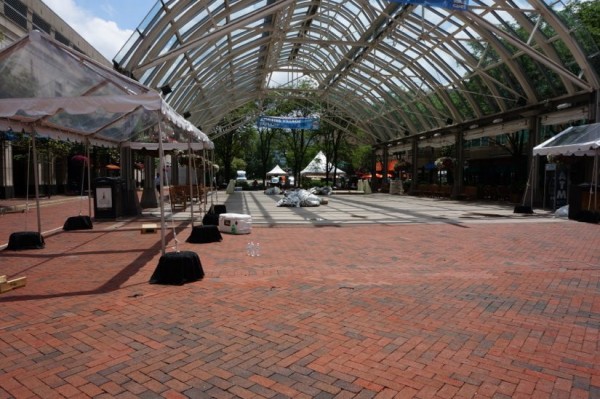 The World Police & Fire Games’ Athletes Village — site of beer drinking, darts playing and nightly dancing — at Reston Town Center was deconstructed and packed in trucks on Monday. The amicable athletes from dozens of nations were back to their beats in Hong Kong and Germany, Indiana and Arlington.

Overall, the 2015 Games were considered a success, especially in Reston, the hub of athlete social activity.

The Fairfax County-based Games, which brought nearly 10,000 athletes and many thousands more family and friends to the area, were expected to pump about $50 million into the DC-area economy. It will be a while before economic officials tally the impact.

Most Reston Town Center stores were busy during the 10-day event. However, there is no way to gauge whether they were busy as usual or busy because of the crowds there for the Games.

Ginger Brookman, who sells cakes, croissants and other treats at Edibles Incredible, says business was booming. The bakery was busy from breakfast at 7 a.m. until closing at 9 p.m.

“People were so nice,” she said. “It was great to meet so many people from so many places. No matter what language they spoke, they all said ‘chocolate’ the same way.”

Across the plaza at the newly opened Neyla restaurant, manager Maroun Wazir said business was steady.

“This effort was put in place to ensure the safety of the athletes as well as all those who were visiting Reston Town Center,” said FCPD public information officer Shelley Broderick.

Broderick said the Reston District did not experience any major incidents or arrests, nor did they have an increase in calls for service during the Games.