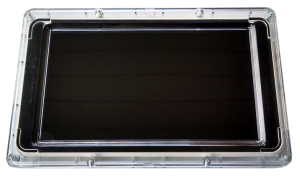 A Reston company has developed a tablet computer that can link inmates with the outside world while still maintaining the kind of security a prison system demands.

“We believe that the Inspire devices are the future of inmate communications, education and entertainment,” Anthony Bambocci, GTL’s Chief Marketing Officer, said in a release. “They improve a facility’s operational efficiencies by reducing costs and conflicts over access to phones, and have nearly limitless educational possibilities. … Our devices have been inspected, reviewed and tested by corrections security staff and other experts in the field, making us confident they adhere to the strictest correctional security standards.”

GTL, which provides a number of telcom products for correctional institutions, says the tablets benefit both inmates and correctional facilities. For the facilities, using them will save paper and streamline administrative tasks. The facility can also load the tablets with educational content, which could include prison rules and guidelines, training manuals for inmate jobs, life skills educational materials and more.

The Reston company says that entertainment options such as streaming music have the potential to help inmates to better cope with their circumstances and promote positive mood. The combinations of these apps can better prepare inmates for life upon release, with the intent to reduce recidivism, they said.

The tablet is being tested at several facilities nationwide. In Alameda County, Calif., inmates are able to use the device to place calls of up to four hours long in the privacy and comfort of their own cell. That offers increased communication with friends and family, which may also reduce recidivism, officials there said. The Alameda County Sheriff’s Office Detention and Corrections Unit has also provided educational content on the tablets.

“Using the Inspire tablets has allowed us to provide valuable educational content to our inmates, helping them to prepare for productive lives once they are released,” said Gregory Ahern, Alameda County Sheriff. “In addition, providing tablets to individuals has lessened conflicts surrounding the use of traditional inmate phones and given inmates productive ways to spend their time.”