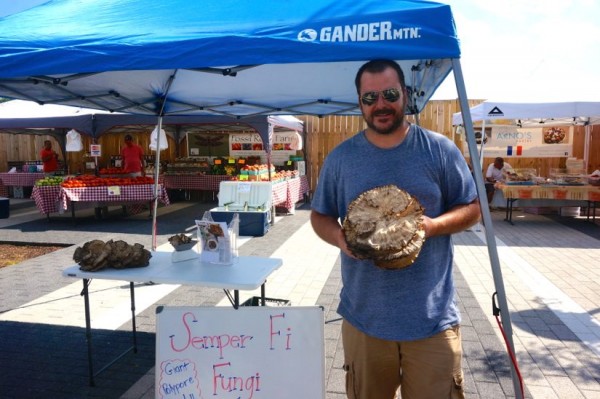 In the midst of the booths that are selling ripe, red tomatoes, fresh peaches and homemade baked goods at Reston Station is Patrick Roche, the Smartmarkets’ fungi guy.

Roche operates Semper Fi Fungi at Reston’s Smartmarket at Reston Station Wednesday afternoons. He can also usually be found at the Oakton Smartmarket on Saturday and Chantilly on Thursday as well.

Roche, a former Marine, has been identifying and foraging Fairfax and Loudoun County land from mushrooms since he was a kid. Now he has turned that into a foodie business, selling a variety of mushrooms this time of year.

This week, he had Giant Polypore mushrooms for sale. Those are fungi as big as your head — growing in 2.5-pound clumps. Roche sells them for $6 for one-half pound.

“I wouldn’t suggest someone buy the entire two pounds,” says Roche. “They probably wouldn’t eat it in time [before it went bad].”

Roche, who also carries chanterelle, morel and other mushrooms, depending on what is available, will also tell you how to prepare your find.

He says the Giant Polypores are tasty after they are sautéed down and put in a soup.

Patrick Roche of Semper Fi Fungi with a Giant Polypore