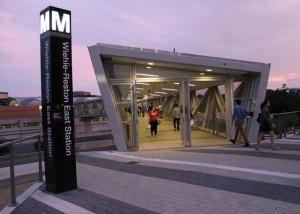 This is an op-ed by Terry Maynard of Reston 2020. It does not represent the opinion of Reston Now.

As you were enjoying your summer, probably including a family vacation, our County leaders were — and are — planning to increase the allowable density in Reston’s transit station areas (TSAs) again through amendments to the zoning ordinance.

The reason: Fairfax County is running out of ways to generate taxes to cover its expenses as job growth and development falter. At this point, so close to another local election, they are neither ready to increase our taxes nor cut well-liked programs (other than parks and libraries, of course).

They have to add more taxable property — residential and commercial — to drive up revenues. And Reston and Tysons are the places they intend to do it.

In Reston alone, the County staff is planning to increase (or eliminate) the maximum allowable population per acre in the Reston Planned Residential Community (PRC) — a zoning category.

According to the Fairfax County’s demographer’s count, Reston now has a population of less than 62,000, about 10 people per acre. Reston’s current limit is 13 persons per acre for a total population of about 81,000 according to a county briefing. Using absolutely absurd “household population factor” values (ostensibly the typical number of people in a household by type of household), the zoning staff has put Reston’s population at more than 73,000 people or 11.7 people per acre (10 percent available capacity).

We are, in fact, more than 30 percent short of that capacity. Yet, if the “cap” is increased or deleted, it creates more “flexibility” for developers, which as the next paragraph will show, is the goal.

The Zoning Staff is also proposing a near doubling of the allowable density in all TSAs to a base density of FAR 5.0 with bonuses up to FAR 5.5, and affordable and market housing not counting against the maximum. Yet the Reston Master Plan just approved by the Board of Supervisors in June calls for the highest base density to be between FAR 3.0-4.0 in the two land units either side of the Town Center Metrorail station, each with a potential bonus of FAR 0.5, which is where density should be most intense. Both the Wiehle and Herndon-Monroe TSAs have much lower base densities with the same FAR 0.5 bonus opportunity.

While the passage of the new zoning language would not automatically boost the allowable base density to FAR 5.0, “the Board may approve an increase up to 5.0 when . . . the proposed development is implementing the density/intensity and other recommendations of the comprehensive plan or any other design guidelines endorsed by the Board.” “Any other“– talk about a hole you could drive a truck through.

Moreover, just so you know, the proposed zoning amendment reduces the required number of parking spaces and, while calling for 20 percent open space overall, requires that only half of that be at ground level. And the 20 percent open space includes County parks. If you’re walking along the street, you’ll be lucky to see a tree, shrub, flower, or grass; but asphalt, bricks, concrete, and glass will be in great abundance.

Of course, there was no more than the legally required notice to the public of these proposed changes, including an absence of communications from our Supervisor Cathy Hudgins, who represents both Reston and Tysons Corner on the Board of Supervisors.

Yet, while we were not told about the proposed changes, the Zoning Staff was busy writing a letter to developers, attorneys, and other businesses for their comment. Here is a key passage:

Staff is seeking your input on this proposal prior to authorization of this amendment for public hearings. Please feel free to forward this draft to any other interested parties. In order to meet scheduling deadlines, your comments are requested no later than September 4, 2015 (subsequently extended to September 14th). (Source: Solicitation for Comments on a Proposed Zoning Ordinance Amendment Regarding the Palnned (sic) Development-Commercial (PDC) and Planned Development-Mixed Use (PRM) Districts, Commercial Revitalization Districts (CRD), Commercial Revitalization Areas (CRA), Community Business Centers (CBC) and Transit Station Areas (TSA), August 21, 2015.)

Stand in line, taxpaying public. We’ll let you know when you can speak up, and then ignore it. In the meantime, we’ll let those who will profit from these changes make additional suggestions.

The bottom line is that the proposed changes will allow substantially more density around Reston’s Metrorail stations than the currently approved Comprehensive Plan if they are approved by the Board of Supervisors. This after some four years of work by a highly developer-dominated Reston Task Force in recommending new mixed-use, high-density development around our Metro stations and a lengthy County approval process for the Comprehensive Plan amendment that integrated most of those recommendations, yet allows even greater “flexibility” to developers.

And now the County Staff and our Supervisor are not the least bit interested in offering information that would allow substantially greater density in Reston’s station areas with the people who would be most affected until they have maximized their opportunities for tax revenues and developers’ opportunities for profit. The public hearing will be a formality before a rubber stamp approval by the Board of Supervisors.

This is what “planning and zoning” in our once special “planned community” of Reston has come to. We’re just another set of sub-divisions along a Metro line from the County’s perspective, despite all the soothing words from our leaders’ mouths.