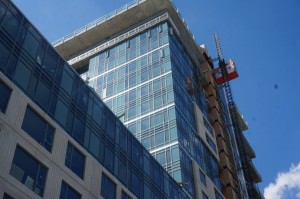 Reston Association land use attorney John McBride estimates that Reston could have an additional 48,000 residents in about 30 years.

That’s one of the reasons the RA Board voted on Thursday to make suggestions to the Board of Supervisors about upcoming changes to Fairfax County’s zoning ordinance.

The revisions are considered “necessary to promote the health, comfort, safety and general welfare of Reston Association members, as well as to conserve, protect and enhance the value of all real property subject to the Reston Deed,” RA said in its resolution.

At issue is development in Reston’s former industrial zone, the stretch of land along the Dulles Toll Road. Comstock’s BLVD Apartments at Reston Station, slated to begin leasing soon, will be the first residential development there, but several developers have projects in the pipeline in order to be close to the Wiehle-Reston East Metro.

The text changes mainly have to do with Floor-Area Ratios (FAR), a mark of density. The board would like the leeway to authorize FAR, often less than the maximum allowed by the county, depending on the project as more housing is built in the industrial corridor. See the full resolution here.

“Metro has resulted in a lot more [development] going on,” McBride said at Thursday’s Board of Directors meeting. “Zoning, land use and development are primarily Fairfax County functions. They have legal authority. Our job is to influence so a project is better and meets our community needs and preferences.”

McBride told the board he predicts Reston will grow faster than Tysons Corner, which also has new Metro service, because Reston is already a place with community amenities and residents.

Reston’s current population is about 60,000.

“The first Reston Master Plan said we were not to exceed 78,000 people,” said McBride. “We are not there yet. That continued on the Master Plan until two years ago, when it was amended. For a short while, we had another number. PRC [Planned Residential Community] ordinance says no more than 13 people per acre for all PRC zoned land in Reston. That’s about 80,000 people.”

“The standard is still there, but on Jan.1, it is planned to be changed by Fairfax County,” said McBride.

McBride gave an example of how the population may grow if unchecked. He said there may eventually be 20,900 new dwelling units within the former industrial corridor in Reston.

“Assume 2.3 people per dwelling, and that is 48,070 people,” said McBride. “That gives you a feel of the magnitude. It’s almost a doubling of Reston Association members, Reston Town Center Association members and the Reston population itself.”

At-large board member Ray Wedell said such as large increase “is not what we are supposed to be about.”

“What kind of influence do we have,” he said. “When we look 10, 15, 20 years at what we are going to be. … I have a feeling there are many thousands of people who agree with me that this is not the way we want to go. [We need to] stop and think and influence people who have the ability to shape this. This needs to be reshaped.”

However, Wedell pointed out that “a lot of these developments are not even going to happen.”

“There already is a glut of luxury rentals here,” he said. “What is going to happen when you get 1,000 more units in the same area?”