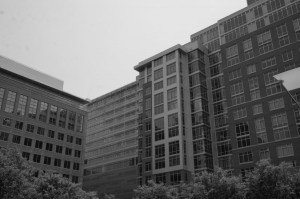 This is an op-ed by Reston 2020’s Terry Maynard. It does not represent the opinion of Reston Now.

(Updated, 12:30 p.m. Friday) Correction:  Maynard has reported the that area affected by the change in the size of the Transit Station areas, allowable square footage of development, and other related numbers late in his op-ed are actually about one-third of those reported. In particular, the expanded area and high densities would allow about 438 million square feet of total development, not 1.4 billion square feet as stated.

A few days ago, I wrote an op-ed published here on the County’s efforts to increase the allowed population density in Reston and double the permitted zoning density in Transit Station Areas (from FAR 2.5 to FAR 5.0, plus a 0.5 FAR bonus for affordable housing), including Reston’s three stations.

Aside from allowing major density increases here, these proposed changes affect other types of County “districts”, such Community Business Districts, Commercial Revitalization Districts, and Commercial Revitalization Areas elsewhere in the County. These include Baileys Crossroads, Seven Corners, McLean, Merrifield, Lake Anne (yes!), Annandale, Springfield, and most of the Richmond Highway area. And, of course, all the areas surrounding the County’s Metrorail stations. And we already have reliable commentary that developers intend to maximize density in at least one of these “districts” once the zoning law is changed.

All these areas would now be incorporated into the zoning code as either Planned Development Commercial Districts (PDCs) or Planned Residential Mixed-Use Districts (PRMs), the difference being the predominance of commercial or residential uses. The density caps may be approved if the County “is implementing the density/intensity and other recommendations of the comprehensive plan or any other design guidelines endorsed by the Board.” “Any other guidelines;” that’s a hole as large as a skyscraper.

The adding of these “districts” to the PDC or PRM categorizations and upping the allowable density is all part of the Board of Supervisors’ strategy to allow massive urbanization of Fairfax County over the next several decades.   Not just the Reston you know, but the County you know would be completely different if market conditions permit.

In fact, early this year the Board approved a new County “Strategic Plan to Facilitate the Economic Success of Fairfax County” that calls for this urbanization of Fairfax County.   The plan was developed by the County’s Economic Advisory Commission and its panel represented just about every County “sector” except residents, the people who pay more than half of the County’s taxes and elect its Board. As you might expect, however, the strategic plan cynically states that the County’s vision is “To protect and enrich the quality of life for the people, neighborhoods and diverse communities of Fairfax County….” But who needs them in preparing the plan? What value could they possibly add?

Not only does the County plan to double densities throughout transit station areas, it plans to double those densities at double the distance from the stations, changing each TSA area from 5 sq. mi. to 10 sq. mi. And, yes, it expects you to walk a mile to catch Metro.

All told, that offers up as much as 1.4 BILLION gross square feet (GSF) of potential development (5,280SF2 X 10SqMi X FAR 5.0) at each County Metro stop where, in Reston, we currently have about 63 million GSF (FAR about 1.9) in Reston Town Center, including Town Center North, a more than twentyfold increase in density. If that were to be developed with 80 percent of that space focused equally on office and residential uses (560 million SF each, the rest in open space and other job uses), that would allow 1.9 million office workers and more than 450,000 new housing units with 900,000 residents in each transit station area using current County high-density office worker and residential space planning guidelines.

That’s many times more office workers and nearly as many residents as exist in ALL Fairfax County now.

Yes, that much development.

But here is what’s important: That strategic plan is just a plan whose absurd values can be reduced or ignored at any time. Even development potential laid out in the County Comprehensive Plan of which the Reston Master Plan is a part can be reduced at any time. What cannot be reduced — as the Virginia Supreme Court told Fairfax County years ago — is development potential authorized in the zoning code. Once density, measured by floor-area ratio (FAR), is embedded in the zoning code, the property owner has “by right” authority to develop the property to its limits subject to other constraints in the code (open space requirements, etc.).

And that is why this proposed change to the County zoning code is so critical to Reston’s and many other County communities’ future.

It is time for Reston’s community leaders at Reston Association, Reston Citizens Association, and the developer-dominated Reston Town Center Association to act on behalf of Restonians, just as other community groups around the County have been doing to protect their communities. Aside from these two RestonNow postings, I have been in contact with all three groups to point out what is going on and asking them to represent Reston’s interests to the Board.

All Restonians need to make their views known to Reston’s leaders and to the Board of Supervisors before we become locked into outrageous development that destroys the character of this Reston planned community as well as other PDC and PRM areas in the County. Moreover, we need to tell the Board that the people of our County need to be involved as early in any such proposed changes as the business interests who desperately want them.