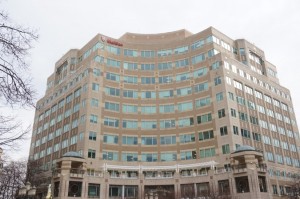 Boston Properties has completed the final part of a transaction that makes the company the sole owner of Reston Town Center.

The company recently  completed the second part of a large land deal with Beacon Capital Partners, a process that began more than three years ago, the Washington Business Journal reported.

Boston Properties exercised its option to acquire Beacon Capital’s 50-percent stake in office/retail complex Fountain Square — the two large office buildings with ground-floor retail near RTC’s Mercury Fountain — for about $100.9 million in cash and about $105.6 million in assumed mortgage debt, the company disclosed in an earnings statement.

With the deal for the 759,000-square-foot Fountain Square, Boston Properties owns pretty much all the space at RTC.

In 2012, Boston Properties made a deal to buy Fountain Square up to $385 million (about$474 per square foot). It contributed $87 million for a 50-percent stake in the Beacon Capital affiliate that owned the property, with an option to acquire Beacon Capital’s remaining 50 percent stake as long as it did so before October 2016. The Washington Business Journal recognized the deal in 2013 as the best suburban office sale of the year.

Meanwhile, Boston Properties will begin work soon on Blocks 4 and 5, the last remaining undeveloped parcels at Reston Town Center. The new construction will add up to 549 residential units and nine levels of underground parking to the approximately 235,000 square feet of retail space, 524,000 square feet of office space, more than 1,000 residential units and 2,830 public parking spaces already at the town center.