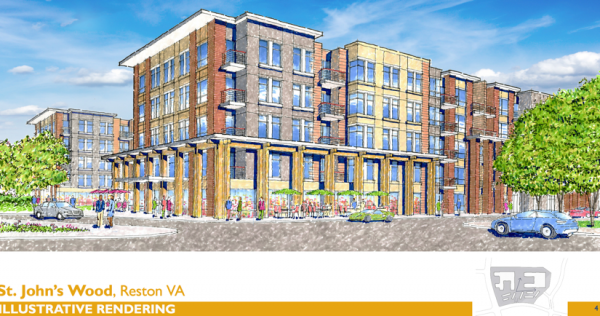 The meeting was for residents in the general North Point neighborhood. Current residents of St. Johns Wood will have an additional meeting of their own, Bozzuto reps said.

Here are some of the details:

The plan includes an additional traffic entrance/exit from the community located at Reston Parkway and Center Harbor Road. An exit on Center Harbor has been added to the current one at North Village Road.

Twelve percent of the units would be set aside for affordable housing, as required by law.

The redevelopment had been planned for as many as 625 units in three buildings, but earlier input from Reston Association’s Design Review Board and Fairfax County led to Bozzuto downscaling the scope. RA has commented that the new design is more in keeping with the natural and already built environment of the neighborhood.

The plans have been submitted to the Fairfax County Department of Planning and Zoning. There will be a planning commission review and Board of Supervisors vote, both with public hearings.

The developers expect the planning phase will take about two years and construction another two years.

About 40 residents were at the community meeting to voice some of their concerns.

Traffic. Bozutto said their traffic impact study showed minimal impact. However, residents said they are concerned there will be an increase in accidents and traffic congestion since the new exit lies opposite the entrance/exit of the Hampton Pointe Condominiums and a few hundred feet from the intersection of Reston Parkway/Center Harbor.

Schools. Aldrin Elementary School principal Shane Wolfe voiced concerns that the traffic is already a concern with keeping kids safe as they walk to and from school.

Mature Trees. Several speakers were concerned about the loss of large, mature trees that are in the middle of the property.

To see additional maps and renderings, see this presentation on Reston Association’s website.