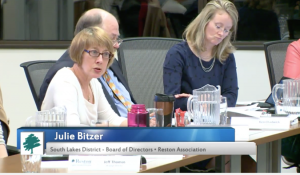 Reston Association’s Board of Directors on Thursday approved a $16.9 million budget for 2016-17, which sets the member assessment rate at $657 for next year.

The $657 annual assessment is a 2-percent increase from 2015. The amount was held in check from rising closer to $700 when the board voted several weeks ago to use a surplus of $1 million to minimize the assessment fee increase.

The 2017 assessment rate will be determined later next year when additional budget adjustments are made. However, an additional $1 million won’t be available, so the assessments could rise closer to the $718 cap, RA treasurer Dannielle LaRosa said at a budget meeting two weeks ago.

Members can pay in one payment or in six installments. There is also a reduced rate for members whose properties are valued at $132,000 or less.

Graves outlined some of the association’s goals for 2016:

Increased monitoring and advocacy of land-use matters with a focus on new residential development projects enhanced multimodal transportation infrastructure, a comprehensive plan for pedestrian/pathway lighting, and the establishment of design guidelines for new mixed use/urban projects in Reston.

Utilizing the services of a grant-writing firm to identify funding opportunities for capital projects and recreational programming.

Expanded mowing, trimming, weeding and curb cleaning of roadways under VDOT control in Reston. The association will be seeking reimbursement from VDOT for these services.

RA plans more than $5 million in capital repair and replacements in 2016 and 2017, including a remodel of the Pony Barn Recreation Area; replacement of several baseball backstops; buying two buses for camp transportation; and an overhaul of the Central Services facility.

The RA Board discussed looking into a fee structure change for upcoming years to reflect property values and household income. Doing so would require a change to the Reston deed, said RA attorney Ken Chadwick.

“The higher the assessment gets the more we have to look at whether it makes sense that a 700 square-foot condo has to pay the same as a 5,000 square-foot lakefront property,” said Lake Anne/Tall Oaks Director Eve Thompson. “We just have to remain sensitive to the reality of living in a fiscally diverse environment.”