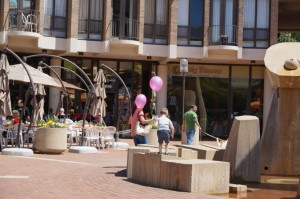 The Reston Museum and Historic Trust recently got an endowment boost from two men who grew up in Reston, and the historic trust board is hoping that will inspire other Restonians to make year-end contributions.

The RHT is in the midst of a fundraising campaign with a goal of of raising $100,000 by Founder’s Day in April 2016 to expand its outreach and educational programs; employ a full-time director; and retire the debt on the Reston Museum at Lake Anne Plaza.

Ben Barokas and Ben Lillienthal, both of whom now work in the tech industry, gave a combined $30,000 to the RHT. Barkoas is a 1991 Herndon High grad. Lillienthal attended Lake Anne Elementary and Langston Hughes Middle School before attending high school outside of Reston.

“Both Ben Lillienthal and Ben Barokas understand that giving back to organizations where they grew up, like the Reston Museum, is important and the right thing to do,” the endowment chairs wrote.”

The museum is also conducting a campaign urging residents to donate a $1 for every year they have lived in Reston.