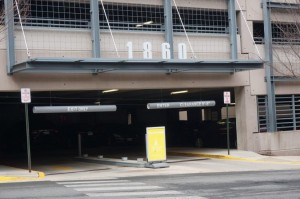 Reston Town Center employees can expect to pay a monthly parking charge when the center goes to a pay parking system this summer.

The town center announced earlier this week it is in the process of installing a paid parking system for its seven garages. The system, which will be rolled out gradually, will likely go into effect late this summer, RTC officials said.

That has led to frustration by many merchants and outrage from many customers, who say they will no longer visit RTC if they have to pay to park.

“Horrible stupid idea,” said one commenter on Reston Now. “Penalize everyone for the misdeeds of a few. … What they don’t get is that the majority of those going to the restaurants during the week are usually business related and folks from out of town. Imagine trying to tell your business client that you have to download an app in order park, so that you can drink your $8 beer? We don’t need to get used to it because we have choices.”

Here is what the employees will now have to pay to park:

Corporate employees — A spectrum of free to up to $70 a month (depending on if there is an office subsidy; the town center cannot speak for individual offices).

Public monthly — a pass can be purchased for $70 a month

Reston Town Center officials said earlier this week that the new system will cut down on commuter parking, which they said is already happening as some people are parking at RTC and then taking a shuttle bus to Wiehle-Reston East.

The system, called RTC Park, will be app based, says RTC spokeswoman Marion Myers. App users will have their license plate info in the system and will be automatically monitored and charged.

But if you don’t have the app? You will have to go to a kiosk and register your car — potentially adding time and hassle to an otherwise quick trip to RTC.

“You don’t have to use the app, there will be kiosks where you can pay by cash or credit card,” said Myers. “If you go into the garage and park without registering your license, an orange light will flash overhead and security will be alerted. You’ll have 15 or so minutes to get to the kiosk and register. If you don’t, security will put a warning and info on how the system works on your windshield.”

Claude Anderson, corporate operations manager at Clyde’s of Reston, says he is confused and angry at a “total disregard for our guests and our employees through this disguised money grab.”

“With a Reston Town Center [Metro] station not coming until 2020, it seems that they could have thought through a better plan to accomplish their aim of stopping commuter abuse,” said Anderson.

Anderson said he has discussed employee parking with RTC management.

“While [$50 a month] is definitely a discount to the proposed maximum guest charge of $24/day, I don’t know of any Northern Virginia shopping center charging their employees for daily parking,” he said.

There will likely be opportunities for validation, but if that is subsidized by merchants, it will a severe hit to their bottom line, said Anderson.

Meanwhile, Tysons Corner Center has more than 11,000 free parking spots and is built adjacent to a Metro station with no public parking. The mall has no plans to charge money for parking, a Tysons Corner spokeswoman said.

The system tells motorists how many spaces are available on a given level as they look for a spot, a similar feature of the plans for Reston Town Center.

Tysons has also taken measures to cut down on commuter parking, she added.