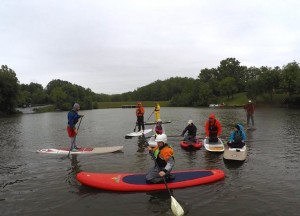 It has finally stopped. For now.

“It” is the rain and it has interfered with everything from baseball games to last weekend’s Northern Virginia Fine Arts Festival to the general mood of the people of Reston.

The Capital Weather Gang says so far this May, D.C. has had a record number of rainy days (19 of 23) and the coolest high temperatures since 1882. This May’s afternoon highs are running 15 degrees cooler than last May. It is nearly Memorial Day weekend and we still haven’t hit 80 degrees.

The Capital Weather Gang explains why the weather has been so lousy:

A storm track has been stuck over the Mid-Atlantic, continuously cycling weather system after weather system through the region — like a conveyor belt.

The jet stream, the high altitude river of air along which storms usually track, has pointed at and run through the Mid-Atlantic throughout the month.

It is perfectly normal for the D.C. area to be caught in the jet stream’s meandering flow during May. In fact, May is D.C.’s wettest month on average, because the jet routinely zips through the region. But usually, this so-called atmospheric super highway is not fixed on the region for weeks on-end, but on the move.

The jet stream is powered by temperature contrasts, flowing fastest where warm and cool air collide. So when much of southern and central U.S. start to turn summery as May wears on, its average positions shifts towards the northern U.S. Once that shift occurs, D.C. tends to have more warm, sunny days, and fewer cool, damp days.

This May, however, the usual northern jog of the jet stream hasn’t yet occurred in the Mid-Atlantic, although it’s right around the corner. While it’s tempting to try to and find an explanation for this, there isn’t one.

The specific configuration and position of the jet stream in any given year at a given location is somewhat random. Last year, it moved north of the Mid-Atlantic at the very beginning of May and highs were in the 80s for almost the entire month. Very little rain fell.

Just in case your overgrown lawn and canceled outdoor events aren’t enough of a reminder, here are some CWG fun facts:

The area has recorded at least a trace of rain on 19 of 23 days in May and, if we include late April, 23 of the last 27 days. There has been 5.68 inches since April 27. From April 27 to May 11, D.C. and surrounding areas logged measurable rainfall on 15 straight days, the longest streak on record by five days.

If measurable rain falls on three more days this month, that would mark the most rainy days on record in May, passing 20 days in 2003.