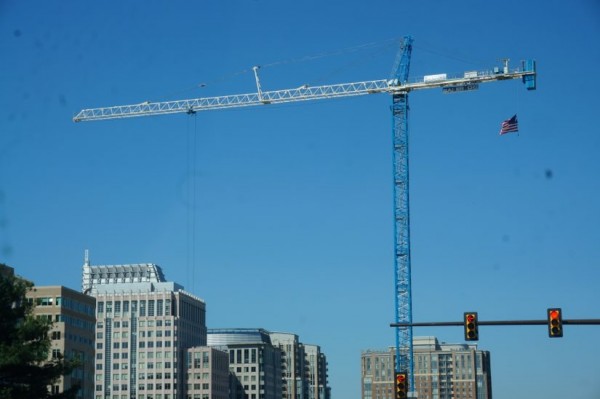 Is Reston, particularly around its transit areas, about to get even more urban?

That’s what the Fairfax County Planning Commission will examine at its regular meeting Wednesday.

The planning commission is considering a proposal that would allow denser development in 22 areas in the county around the Metro’s Silver, Orange, Blue and Yellow lines. If the planing commission approves the proposal, the new standards would go to the Fairfax County Board of Supervisors for a vote on June 21.

It also wants to see residential areas increase from 1.5 FAR to 2.5 FAR if provisions for open space and affordable housing are put in place.

FAR stands for Floor-Area Ratio, a mark of density.

However, even though Reston is undergoing a rezoning and building boom related to transit stations, this would not affect Reston as much as one would think.

In order to implement any new zoning ordinance, the Board of Supervisors would have to adopt an amendment to the comprehensive plan for the Reston TSAs after a public hearing before the planning commission and the board of supervisors.

The proposal to increase the maximum FAR in both of these districts is a direct response to the Board’s adoption of amendments to the comprehensive plan that provide for increased density/intensity recommendations for specific areas located within certain geographic areas of the County.”

Some of the density/intensity recommendations for these
areas would allow for FAR levels greater than those which are currently permitted by the Zoning Ordinance. The proposed increase in the maximum FAR in the Selective Areas will enable a developer to propose a project that will implement the plan recommendations.

For example, certain areas of the Reston Transit Station Areas (TSAs) would permit up to 4.5 FAR under the adopted comprehensive plan and, at this time, there is no zoning district that can be utilized at this geographic location to achieve a 4.5 FAR.

In laymen’s terms, this could mean taller buildings or more units packed into a smaller footprint. It would be in effect for future projects — and it could mean previously approved projects could go back to the county for amended density.

In Reston, TSA’s are considered within one-quarter mile of a Metro station.

Currently, in the PDC District (most of the residential areas of Reston), provisions allow for a maximum FAR of 1.5, which may be increased by the Board up to 2.5 FAR subject to specific increases tied to the provision of additional open space, incorporation of unique design features/amenities, and/or the provision of below surface parking or structured parking within an enclosed building.

The maximum FAR may also be increased in association with the provision of affordable housing.

Staff is proposing to eliminate the current 1.5 FAR maximum and the specific criteria for obtaining increases up to maximum 2.5 FAR and replace it with a baseline maximum FAR of 2.5, retaining the provision for increases associated with the provisions of affordable housing and
subject to additional increases in Selective Areas, as discussed below.

Staff notes that the PDC District was established in the Zoning Ordinance in the early 1970s and the provisions regarding increases from the maximum 1.5 FAR to up to 2.5 FAR were adopted in the late 1970s.

There is a growing backlash against the proposal by some homeowners associations countywide. They sat the higher density will change the suburban atmosphere of neighborhoods.

At a May 25 public hearing at the planning commission, eight of 11 speakers opposed the proposed regulations. Planning commissioners pointed out at the meeting that just because the FAR is growing, it doesn’t mean all developers will build to the maximum density.