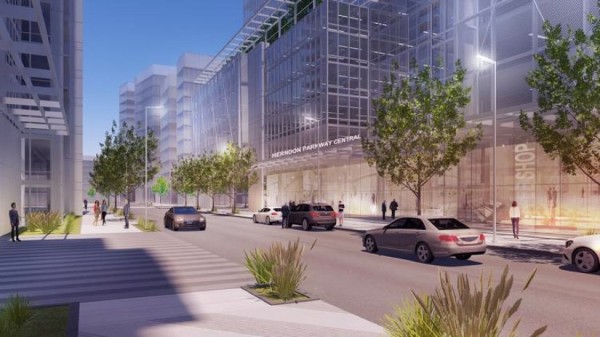 Is the Herndon Metro Station area moving towards development of the mixed-use amenities that are expected to be built nearby?

Herndon Station, which will be located near the current Herndon-Monroe Park and Ride, is part of Metro’s Silver Line Phase 2. It is expected to open in 2020.

There is a 135,000-square-foot building now on the site. The site has an anchor tenant: Booz Allen Hamilton. However,the property could yield roughly 906,400 square feet of additional mixed-use development. Booz Allen’s lease expires in four years, says the WBJ.

The site is owned by an affiliate of a fund managed by UBS Global Asset Management, which acquired the property in 2005 for about $29.2 million, according to Fairfax County land records, the WBJ says. It is assessed at nearly $21.5 million.

Colliers began marketing the property about 10 days ago and have already received a strong response from prospective buyers. A call for offers expected for early-to-mid July.

Interested developers will need approval to submit a development plan for the property, which is part of the Herndon Transit Oriented Core.

More new development is also coming to Herndon’s downtown, as the town council is reviewing proposals from several firms to revamp the 4.6-acre historic area. That redevelopment is not part of the transit-oriented core, however, as its location is more than a mile from future Metro stations.