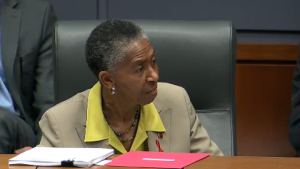 The Fairfax County Board of Supervisors unanimously passed a motion on Tuesday to allow up to 5.0 FAR — a mark of high density — in 22 areas of the county close to Metro stations.

The board also passed an amendment introduced by Supervisor John Foust (Dranesville), that says the McLean area can only build up to a 3.0 in its revitalization and community business district areas. Foust said allowing high density building in McLean would alter the area’s traditional smaller-town character.

While the vote for increased FAR (Floor-Area Ratio) sounds like skyscrapers are on the way, it isn’t, the supervisors reiterated.

Supervisor Kathy Smith (Sully) pointed out that development surrounding the Merrifield Metro is at a 2.25 FAR, and in the urbanized Mosiac District, it is 1.2. Those places could have been built at a 3.0 level, but development in Fairfax County also puts much credence into the limits of the comprehensive plan, she said.

“I am concerned the message that goes out of it is that we with a 5.0 FAR, everyone now will be going out there and developing at that level,” said Hudgins. “From our side, we should be helping the community understand that for the most part people are making investments here.”

“They won’t make an investment in 5.0 if it won’t work. This is not compelling anyone, anyplace to go to highest level. It allows those who are in the highest category to go to that area if appropriate.”

Reston, even in the midst of a transportation-related building boom, is protected by the limits of the comprehensive plan. In order to implement any new zoning ordinance, the Board of Supervisors would have to adopt an amendment to the comprehensive plan for the Reston TSAs after a public hearing before the Planning Commission and the Board of Supervisors.

In Reston, TSA’s are considered within one-quarter mile of a Metro station.