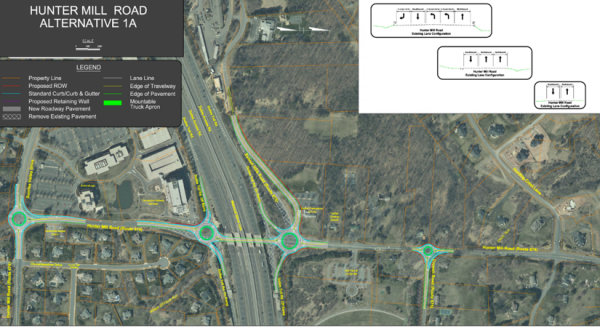 Traffic backups on Hunter Mill Road near the Dulles Toll Road may find future fixes in a series of roundabouts.

The Fairfax County Department of Transportation (FCDOT) has been studying what to do about backups on the two-lane Hunter Mill Road for years. After several community meetings in 2014 and 2015, it put the study on hold about a year ago when new software and measuring methods became available that could better gauge the impact of roundabouts.

“The new model prioritizes movements with higher volumes, resulting in an improved level of service,” during heavier traffic, she said.

Right now, what the county is looking at are estimates and models. The project would be years into the future. It needs citizen feedback, design, approval from the county planning commission and board of supervisors. It also needs money, and county transportation projects are planned through 2020.

In any case, FCDOT is looking at what roundabouts would do at Sunrise Valley Drive and Hunter Mill Road, on Dulles Toll Road eastbound and westbound exit ramps at Hunter Mill, and at Sunset Hills Road and Crowell Drive, which would also be realigned to connect and further smooth traffic on Hunter Mill.

Some of those intersections/road areas are currently at an unacceptable level of service, said Calkins. Roundabouts would bring them up to an acceptable level when the county looks at the increased volume expected to be on the roads in 2030.

Compounding problems on the stretch of Hunter Mill from Sunrise Valley to Route 7 is the one-lane bridge, said Calkins.

Calkins said an acceptable amount of traffic for a road with a one-lane bridge is 400 cars per day.

With new development such as the Oakcrest School, a potential new church, general Reston growth and a possible county septic dumping station coming to that stretch of Hunter Mill, something needs to be done, citizens at the meeting said.

Many said they liked the idea of the roundabouts, which are popular in Europe. They were skeptical about American drivers utilizing them effectively, however.

“They work well in England, but you have to yield to people in the circle,” said one resident. “That is the problem with the American driver. They don’t want to yield.”

Graphic: One of several options for roundabouts on Hunter Mill Road/Credit: Fairfax County.