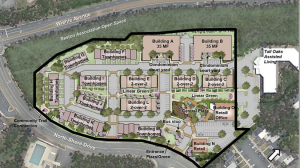 After a lengthy public hearing on Thursday, the Fairfax County Planning Commission voted to defer decision on Tall Oaks’ Village Center’s redevelopment until next week.

The main issues are development conditions that the county staff has recommended but to which developer Jefferson Apartment Group (JAG) has not agreed. Reston Association, meanwhile, wants JAG to pay for specific improvements to the nearby Tall Oaks Pool.

After more than a year and 42 meetings with the county, RA and the community, JAG plans to redevelop the mostly empty village center into 156 residences (44 townhomes; 42 two-over-two townhomes and 70 multi-family units in two buildings); 5,809 square feet of office; and 8,584 square feet of retail.

In the 15 months since first presenting its plan to residents — many of whom were upset that the village center would morph from retail to mostly residential — JAG has made changes. Among them: adding green space; more than doubling the amount of its retail proposal; adding a community gathering place,  and recreational amenities such as outdoor fitness stations for senior citizens and a children’s play area that incorporates natural elements.

RA CEO Cate Fulkerson called out those amenities in her testimony to to the planning commission on Thursday.

“Thus far, the applicant has not agreed to assist with the improvements,” she said.

Mark Looney, the land use attorney representing JAG, said the purchase of an office building at Tall Oaks (where additional retail will be located) was a financial stretch for the developer. JAG cannot commit the money at this time, but is open to more conversation with RA about future improvements, he said.

The 156 households at the new Tall Oaks will be RA members and will eventually add more than $100,000 annually in RA assessments, he added.

JAG says it is declining to make the school contribution because 1) the school system was offered land to build a new school when Tall Oaks was first developed and eventually returned the land rights; and 2) the site was zoned as a shopping center in 1969 and a schools contribution was not required.

JAG has also declined the staff report’s recommendation of a $20,000 contribution to offset impact to Fairfax County Fire and Rescue Station 25 on Wiehle Avenue.

“Approval of multiple new developments in one fire station’s response area could significantly impact that station’s availability and overall response times to all emergency incidents,” the staff report reads. “FRD requests the cost of two preemption devices ($20,000) for traffic signals located along the primary travel route from the closest fire station to the proposed development. The applicants have declined to provide a contribution.”

Looney said JAG would be amenable to making the contribution to fire and rescue.

The planning commission also had concerns about driveway lengths on the garage townhomes (which may result in insufficient parking) and a traffic count that could be misleading because it was conducting on a snowy day in winter, when many commuters may have stayed home.

Meanwhile, three of the intersections along Wiehle Avenue (at Isaac Newton Square, Roger Bacon and Sunset Hills)  have been given a service level grade of “F” during morning and evening rush hours, a Fairfax County Department of Transportation official said.

While some residents have voiced concern that adding 156 homes will further clog an already congested Wiehle Avenue, Looney said they should not compare traffic to current conditions since the village center is only 13 percent occupied.

“When you have a vacant shopping center, any amount of change is gonna be change,” he said.

He said the operational analysis showed a residential development would actually result in fewer vehicle trips than a fully occupied village center.

The planning commission will make its recommendations July 21. If recommended for approval, it will then go before the Fairfax County Board of Supervisors on July 26.