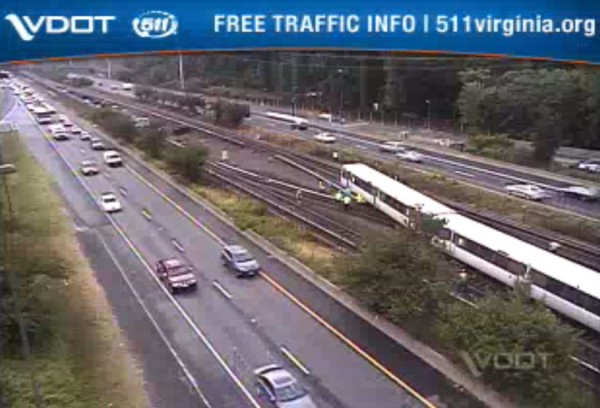 Metro says Orange and Silver service between West Falls Church/McLean and Ballston stations will remain suspended at least through the end of the day Saturday to allow for further investigation, removal of derailed cars, and repairs to infrastructure that was damaged during the incident.

Customers traveling to or from stations west of Ballston are encouraged to use alternate travel modes if possible, Metro said. Metro will continue to provide free shuttle buses between Ballston, East Falls Church, West Falls Church and McLean stations until rail service is restored.

Here is what you need to know if you are commuting by Orange and Silver Friday afternoon:

Due to the location of the incident — a narrow area within the median of I-66 — as well as the damage to railcars, track and third-rail infrastructure, Metro is bringing in specialized equipment, including cranes and re-railing machines, to safely clear the scene without causing additional damage. Only after the railcars are moved from the scene will Metro be able to fully assess the scope of track and switch infrastructure that must be replaced.

In addition, Metro General Manager Paul J. Wiedefeld has directed that a third-party expert be brought to the scene to conduct a parallel, independent review of the incident and possible causes.

At approximately 6:15 a.m., two cars of a six-car Silver Line train derailed just east of East Falls Church station as the train was moving from one track to the other track at a switch point. The cars of the train remained upright and in-line.

The train was traveling in the direction of Wiehle-Reston East Station and was on approach to East Falls Church Station when the derailment occurred.

The location of the derailment is not part of the current SafeTrack work zone, nor was the area worked on during previous SafeTrack work.

The cause of the derailment is under investigation. No preliminary cause has yet been determined.

There was one reported injury: an adult male who was transported for treatment of a non-life-threatening head injury.