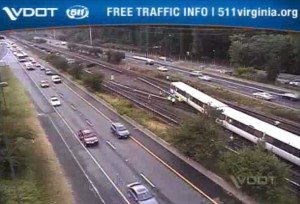 A rail tie issue was the probable cause for last week’s Orange/Silver Line derailment, Metro said on Monday.

The derailment of a train bound for Wiehle-Reston East occurred Friday morning near the East Falls Church station. Parts of the line remained closed through Sunday, but reopened on Monday.

Those rail ties had not yet been replaced under Metro’s SafeTrack program.

While the investigation is ongoing, Metro released the following preliminary findings:

Metro’s safety department has made a preliminary assessment that the causal factor in the derailment is a track condition, specifically a condition where the two rails on which trains run were too wide as a result of deteriorated rail ties.

Other possible contributing causal factors, including car equipment, weather, temperature and other factors remain under review.

At this time there is no evidence of train operator error.

“While Metro and the outside experts continue their review, we are requiring supervisors to conduct a specialized track inspection to look for any other similar conditions that must be immediately addressed,” said Wiedefeld.

Metro has taken additional corrective actions, including: pre-inspecting interlockings (NoMa-Gallaudet, Silver Spring & Takoma) used on the Red Line prior to this morning’s implementation of SafeTrack Surge #6; requiring a supervisory pre-inspection of all interlockings that are required to be used to facilitate SafeTrack closures; and quality assurance audits of all these inspections.