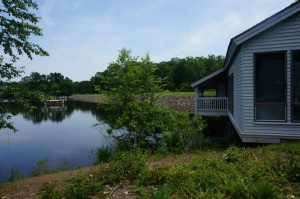 This is an op-ed by Reston resident Ed Abbott. It does not reflect the opinion of Reston Now.

In the next week or so, a Reston Association committee will select a consultant to review and evaluate the purchase and overrun expenses related to the Tetra office property, now known as the Lake House. The consultant will review, analyze and make recommendations to the Board on processes to prevent the recurrence of such a fiasco.

One of the steps in the consultant’s review will be to wade through the public record. The record is extensive and includes documents on the RA and Fairfax County websites as well articles in Reston Now and the Connection.

As the record shows, RA made numerous mistakes over the course of about two years. It is useful to enumerate those mistakes to remind everyone what a dismal job RA did in purchasing and managing the Tetra renovation. It might also provide some guidance to RA’s independent review consultant.

Let’s start with the $2.6 million price paid for the property. In reality, paid for two properties; one real and the other hypothetical. The real was the building as an office. That cost $1.3 million. The hypothetical, a restaurant, would cost an additional $1.35 million. The prices were based on a January 2015 appraisal for the property. RA requested that the appraiser include the restaurant.

Next, let’s look at the closing contract. The contract includes a provision to lease back the property to the original owner from July 31, 2015, to the end of the year with two options to lease, each for additional six months. Unfortunately, the seller died in 2015 and his company decided not to pick up the leasing options.  This all seems reasonable under the circumstances. However, RA booked the revenue for the lease for all of 2016 leading to $100,000 unanticipated revenue shortfall.

Unfortunately, this is not the only unanticipated discrepancy.

Next, consider the Tetra Property Referendum Fact Sheet. As you may recall, RA used the fact sheet to convince RA members that the purchase was in their interest. The referendum passed by a narrow margin. The fact sheet included $259,000 for “capital improvements,” Including $250,000 for the interior and $9,000 for the grounds.  RA made the fact sheet available around March 2015.

There is no public record, as far as I can tell, of any member of the RA staff suggesting there was a problem with the “fact sheet” estimate until the end of May 2016, more than a year later.

In the meantime, the RA staff developed bid proposals, signed contracts and obtained work permits for electrical, mechanical, plumbing and interior work. Very little of the original structure was untouched.

The cost of the work totaled to $428,000, nearly double the quarter million dollars RA laid out in its “fact sheet.” I seriously doubt that the referendum would have passed if the real costs were known rather than the bogus costs in the “fact sheet” presented to the community.

But that is not the end. In addition to the extensive interior work, apparently $1.2 million of landscaping work may be needed, not the $9,000 stated in the “fact sheet.” An RA working group developed a list of items that should be completed and an outside company estimated the costs. The working group made it clear that the estimate was not their doing, but presented it to the RA Board anyway.  Let’s hope the RA staff is not seeking proposals for the work.

I have summarized above the major mistakes on the purchase and renovation of the Tetra Property. Many RA members may already know them. The independent review consultants surely will once they review the record and interview the Board and RA Staff. Some on the Board and staff believe the purpose of the review is to improve “process.”  Perhaps.

More importantly, the review must assign responsibility for the mistakes made. If no one is to blame for the Tetra fiasco, then no one, neither the Board or the RA staff is responsible. If that is true, then they should offer their resignation or be removed.

Something on your mind? Send a letter to the editor to [email protected].