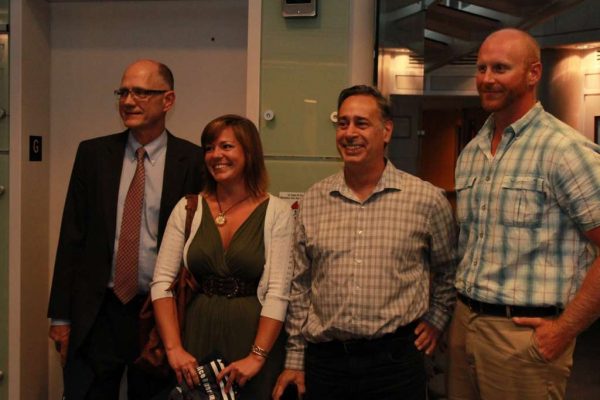 Three Herndon residents were honored Tuesday by the Herndon Town Council for their lifesaving efforts on a rainy night last June.

The three — who were not known to each other — came upon a stranger lying face down in the 200 block of Herndon Parkway in the middle of a torrential rainstorm.

The man was unconscious, and it was determined, in need of lifesaving CPR.

Reynolds, Savage and Simpson called 911 and provided the emergency call-taker with their location, and information concerning the man’s physical status. Then, following the dispatcher’s directions, they provided CPR until EMS arrived on-scene and were able to take over, Herndon Town Council reps said.

Once at the hospital the man, identified as Agostino (Tino) Tarantino, was stabilized, and eventually went on to make a full recovery.

Both EMS personnel and hospital staff told the Town of Herndon that the quick thinking and action taken by our three award recipients directly aided in the man’s survival.

Tarantino was also at the ceremony to thank the three citizens who helped save his life.

“We are grateful to the good people out there who take a risk and step in to help when others might not,” said Merkel. “Good people doing good things, neighbors helping neighbors. It was an honor to be in the presence of these everyday heroes — and we are all thankful that Mr. Tarantino is doing so well!”

More Stories
RA Board Stands in Opposition to St. John Woods’ Redevelopment PlanDel. Ken Plum: Trump a Danger to Our Way of Governing