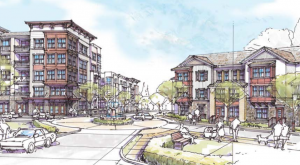 Reston Association’s Board of Directors has joined in support of North Reston residents in opposing a massive redevelopment of St. Johns Wood apartments.

Developer Bozzuto is proposing to nearly double the size of the garden apartments, from 250 units to 467 units and 46 townhouses. Residents have spoken out at several meetings that the plan is out of scale for Reston Parkway and Center Harbor Road, which is more than a mile from the future Reston Town Center Metro station.

Residents — more than 500 of whom have signed a petition — also have concerns about traffic impact, effect on the tree canopy and forcing lower-income residents to move.

Here is the motion the RA Board unanimously passed at a special meeting on Wednesday:

The board moved to oppose the current St John’s Wood Redevelopment Application for the following reasons related to its consistency with the adopted County Comprehensive Plan with specific focus on:

1. Environmental impacts including but not limited to such impacts on RA common area and natural areas.
2. Transportation impacts and parking/overflow.
3. Density and intensity of redevelopment proposal.
4. Mitigation of impacts to RA community amenities/facilities.
5. Impacts to county schools.

The application has not met the express conditions required in the adopted Comprehensive Plan to justify the medium density, multi-family residential use option.

RA says it will send a letter delineating the association’s position, including the written comments received during the special board meeting, on the current application to the Reston Planning & Zoning Committee, the Fairfax County Planning Commissioner Hunter Mill representative, and the Hunter Mill Supervisor Cathy Hudgins.

The board also encouraged citizens — some of whom have been visibly angry at recent meetings on St. Johns Woods — to do the same. In the end, RA can take a stand on its opposition, but does not have much power in stopping development, RA’s land use attorney John McBride reminded them on Wednesday.

The approval of a development application ultimately comes from the Fairfax County Planning Commission and the Fairfax County Board of Supervisors. McBride spent more than an hour at Wednesday’s meeting explaining the process to the room packed with residents.

He also pointed out that according to the Reston Comprehensive Plan, which was modified in 2014 and 2015, Bozzuto is within its rights to propose the redevelopment plan. The plan actually downgraded the parcel from high density to medium density, and Bozzuto has amended the proposal accordingly. The redevelopment plans began in 2014 with 659 units.

Even with that explanation, residents were still fired up on Wednesday.

One attendee heckled McBride, yelling “You take me for a fool when you lecture me like this! I don’t need a line-by-line explanation. I need to discuss the plans that are affecting my life. All you want to do is let developers run roughshod over Reston!”

Another resident said he was tired of hearing RA say it has not impact on development decisions.

“RA has indicated it has no power to stop this,” said resident Stephen Canner. “The RA Board has to think and act more creatively. You have the power of the bully pulpit. Issue a statement to the public, the supervisors that proposed development DOES NOT provide benefits to its inhabitants. It is not in compliance with basic tenets of Reston’s governing deed. It is time to step up to the plate. Do the right thing:  tell the authorities that this community does not want to development.”

Canner also expressed anger at the lack of notice residents’ received concerning previous RA meetings on this topic, including a July meeting of the Design Review Board. He said residents only knew about it six days in advance.

That led RA to pass another resolution Wednesday. Residents will now have 21 days advance notice of on new development and redevelopment information sessions, as well as applications including conceptual plan applications.