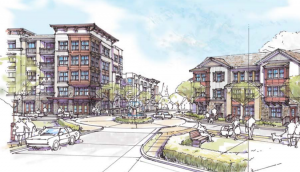 Bozzuto’s plan to more than double the size of St. Johns Wood apartments will not go before the Fairfax County Planning Commission later this month.

The plan — which has received heavy criticism from nearby North Reston residents — will turn the 250 units in nine garden-style buildings into 467 units and 46 townhouses. They will be rental units.

The public hearing, scheduled for Oct. 26, has been moved at Bozzuto’s request to a date TBD, according to the planning committee agenda. This will give Bozzuto more time to tweak the plan and respond to citizen concerns.

Some of the complaints from residents: poor design; too much development too far from the future Reston Town Center Metro station; traffic on Center Harbor and North Village Drive; and parking on side streets.

St. Johns Wood is in a wooded, residential area across from North Point Village Center.

Bozzuto reps have said the complex at Reston Parkway, North Village Road and Center Harbor Road was identified for high density as far back as when Reston was first planned in 1964.

Meanwhile, Reston Association’s Board of Directors has sent a letter to Bozzuto detailing its concerns about the redevelopment plans. RA president Ellen Graves says the St. Johns Wood application “does not conform to the site-specific, detailed and unambiguous recommendations of the Reston Master Plan.”

See the entire RA document below.