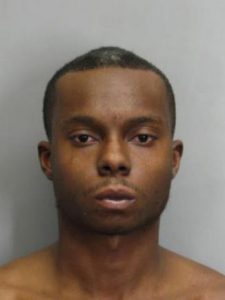 A Reston man is facing a number of charges — and recovering from a bite from a police K9 — after trying to elude a Fairfax County Police officer.

The man, 20-year-old Devante Harris of Reston, was at a red light at Wiehle Avenue and North Shore Drive Tuesday at 10:48 p.m.

An officer was behind Harris at the light as he turned right on red in violation of a posted sign. The officer attempted to initiate a traffic stop but the Honda fled and a brief pursuit ensued, police said.

Harris lost control and crashed near Association Drive; he then fled on foot. The Fairfax 1 helicopter and a K9 team responded to assist in the search for the fleeing suspect.

When K9 located the suspect, he “was combative, refused to comply with the officer’s commands, and was bitten by the K9 dog,” police said.

Harris was transported to Reston Hospital Center for treatment. Upon his release, he was transported to the Fairfax County Adult Detention Center and charged with felony speed to elude, reckless driving, disregarding a highway sign, driving on a suspended license and improper registration.