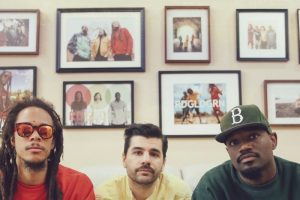 (Updated at 3 p.m.) An indie go-go band from Reston has pulled in more than $19,000 from friends and fans after someone stole all their instruments and equipment during a tour stop last week, according to a GoFundMe fundraising website.

The guys from RDGLDGRN woke up to a call from their hotel’s front desk in Medford, Ore., Friday morning. They were told that the back of their trailer was open.

“We rushed outside in disbelief and sure enough, someone used bolt cutters to cut through our lock, and took EVERYTHING !!!!!” the band wrote on the GoFundMe website.

After filing a police report, the band assessed the damages and estimated that more than $17,000 worth of instruments and equipment was gone. The musicians known as Red, Gold and Green, who perform as RDGLDGRN, then started the GoFundMe page to ask friends and fans for help raising money to continue the tour.

“We are in the final stretch of our current tour and start a short run in a few days with no equipment and nothing was insured,” the group wrote. “We just started our own label, released a new single, and have been touring with the Dirty Heads and we really need everyone and anyone’s help with raising money to pay for this equipment.”

With four more shows to play before Thanksgiving, the band already has raised more money than what it told police its gear was worth. But for Red, no amount of money can replace his main guitar — a gift from his deceased godfather.

Formed in 2011, the group has played with other Virginia natives, including Dave Grohl and Pharrell Williams.