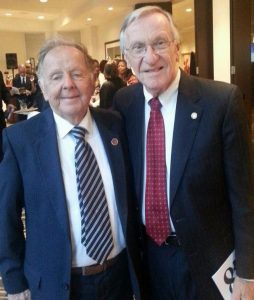 Former Senator Charles J. Colgan passed away earlier this month. He retired just a year ago as the longest-serving State Senator in Virginia history. He was the last remaining World War II veteran serving in the Commonwealth’s Senate. He truly earned a place among the “greatest generation.”

Chuck, as he preferred to be called by his peers, was orphaned by age 5, raised by his grandparents, and served in the Army Air Corps. Aviation was an important part of his life; he founded Colgan Airways, flying out of Manassas with service to 53 cities. His wife of 52 years preceded him in death. Surviving him are his eight children and their spouses, his second wife, 24 grandchildren, and 22 great-grandchildren.

Beyond his personal and business life, Senator Colgan’s public life was unparalleled. He served on the Prince William County Board of Supervisors before being elected to the Virginia Senate for the 40-year tenure he completed. His awards and recognitions are numerous — the most recent being the naming of the Charles J. Colgan Sr. High School in Prince William County. All this history of the man does not capture the essence of what made him so highly regarded. He ran and was elected as a Democrat all his life even as he voted consistently pro-life on issues of abortion. He stayed in office while Republicans won most of the elective positions in his area. In the Senate, he was known for his willingness to work across party lines on issues he thought were important. He was an avid supporter of public education and was greatly influential in supporting funding for George Mason University, including its Prince William campus, and funding for new buildings for the Manassas and Woodbridge campuses of Northern Virginia Community College.

He was a much-loved and towering figure for his philosophy of life that he often expressed in folksy terms. He was known to advise that one should always be worth more than you are being paid. A smile, he would say, is like a business card; it only works if you give it away. He was always cheery regardless of the tough issues he faced. These statements of his philosophy were included in the program for his celebration of life as “Colgan’s Top Ten.” He understood that the best way to defeat your enemy is to make him your friend. The qualities that made him so richly admired by his family, neighbors and legislative colleagues inspired 800 people to come to his retirement party and many hundreds to come to his Mass of Christian Burial. That kind of attendance proved he embodied his belief that when you are getting ahead in life, make sure you reach out and give someone a hand up. Live your life, he would say, in such a way that if someone speaks ill of you, no one will believe them.

I believe Chuck Colgan is a true role model for leadership, for he believed that one should always ask yourself, “Am I doing the right thing?”

Each year, I survey constituents on issues of concern to them and on issues that are likely to be considered by the General Assembly. Your views are important to me. Please take a few minutes to respond to the survey that can be found at www.kenplum.com.