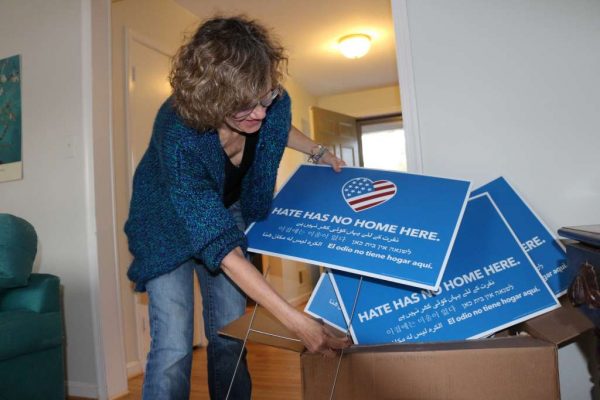 Reston’s Elizabeth Vandenburg was in D.C.’s Chevy Chase recently when signs dotting the community called to her.

“There was an initiative by the neighborhood, and there were signs all over the place,” she said. “Seeing these signs, it just was really inspirational.”

The signs were part of the “Hate Has No Home Here” project, which started in November in Chicago’s North Park neighborhood. Students at an elementary school devised the slogan and a local graphic designer developed the artwork. Word has gotten out and the campaign has spread across the nation and world. 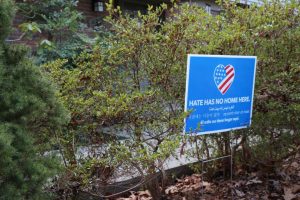 Anyone can make their own HHNHH signs by downloading the artwork and taking it to a print shop. Vandenburg had 100 signs printed at Sign & Print in Herndon. One is currently in her front yard on Hunting Horn Lane and she is working to distribute the rest to friends and others who have contacted her through Facebook.

Vandenburg said she was encouraged to become part of the project because she feels it is important to stand up for what you believe.

“I’ve been an advocate for a lot of different issues, and I wanted my voice to be heard,” she said. “I wanted to feel inspired as I went around Reston. I know Reston is inclusive and supportive of these causes, but having it be visible gives my heart a lift.”

The project defines itself as non-partisan:

This sign is a public declaration that hate speech and hateful actions against others will not be tolerated by the person or organization displaying the sign. In that, it is apolitical. This sign is a statement that, while it is OK to disagree with others civilly regarding issues, it is not OK to intimidate or attack a person or group — verbally or physically — based on attributes such as gender, ethnic origin, religion, race, disability or sexual orientation. The colors of the sign — red, white and blue — are the colors of the American flag, not any political party.

Vandenburg said, however, that issues such as President Trump’s recent executive order on immigration emphasize the importance of the project’s message.

“It’s a privilege to be an American,” she said. “I believe it’s my responsibility and duty to speak up.”

For more information on the project, visit its Facebook page.