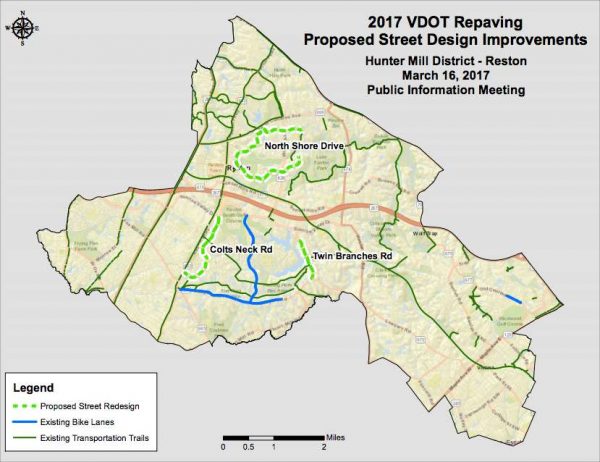 The Fairfax County Department of Transportation has scheduled a community meeting later this month to discuss proposed safety improvements.

According to FCDOT, “road diets” — converting an existing four-lane undivided roadway segment to a three-lane segment consisting of two through-lanes and a center two-way left-turn lane — are being proposed near Tall Oaks Village Center and on Colts Neck Road between Glade Drive and Sunrise Valley Drive.

In addition, bicycle infrastructure improvements are proposed for North Shore Drive, from Ring Road to Wiehle Avenue. Two options are under review:

The narrowing of travel lanes, in the effort to reduce speeding and add bike lanes, is also being proposed on Twin Branches Road between Lawyers Road and South Lakes Drive, as well as on Colts Neck Road between Reston Parkway and Glade Drive. The addition of crosswalks to improve pedestrian safety on Colts Neck Road is also in the proposal.

According to FCDOT, the proposed improvements are limited to changes that can be made with roadway striping as part of the repaving process.