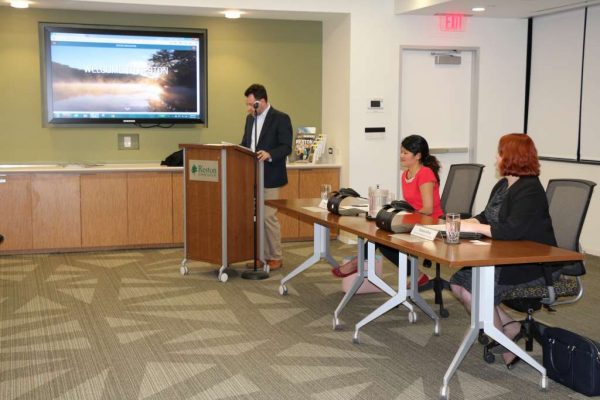 White, a contracts administrator who has lived in Reston since 2004, said she has become distressed with the way the RA board has operated in recent years.

“The big commitment I’m going to make is to find out why we aren’t making good decisions within the RA, why we’re not meeting our budget line items such as at the Lake House, and what I can do to help preserve green space within Reston Association lands and in our community in general,” she said. 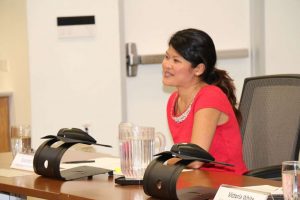 Durrani, a six-year resident, described Reston as a charming place with an unmatched sense of community she wants to help grow and prosper.

White said bringing “civility” back to the board is a goal of hers.

When asked about the need for pedestrian lighting in the area, including around Hunters Woods Plaza, White said she is “not necessarily a fan” of the idea.

“I worry about the animals that live in the woods and how the light would impact their sleep cycles,” she said. “I also wonder about the safety benefits from having lights — as anybody who walks through lights on a lighted path at night knows, when you’re under the light you see everything around you, but when you reach the end of the light you can’t see what’s two feet in front of you.” 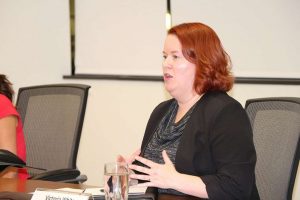 White said additional patrols by Fairfax County Police Department officers are necessary to increase safety and decrease crime in the area. Durrani said CCTV could be used to make problem areas more safe, and she also believes cluster associations should be engaged in public safety.

“Just getting together, I think, and helping one another — that’s what community is about,” she said.

Both candidates spoke about the Pony Barn proposal, which is currently on hold, saying that it is the type of project Reston Association must be more careful when undertaking.

“Everyone loves a beautiful butterfly garden,” Durrani said. “But I don’t think right now we need something like that.”

Director Ray Wedell’s proposal for tiered assessments based on property values was something both women said they can get behind — at some point in the future.

“As time has marched on, the difference between the high end and low end of property values in Reston has gotten further and further apart,” White said. “This is definitely something we should be discussing; however, I think maybe we should be discussing it a little bit further down the road, because we do have some very pressing issues.”

Durrani said the proposal is in line with her goal of continuing Reston’s sense of community for all.

“The vision that I have for Reston is all within our fingertips — the brilliant minds, the passionate communities, the efficacy of the symbiotic relationships,” she said. “I see the discussion, the proposal of the tiered assessments, really mirrors that.”

The candidates also answered questions on better member outreach, future capital improvements and more. The forum can be viewed in full on Reston Association’s YouTube channel.

The candidate who wins the race will serve a three-year term on the board. Voting will continue through April 3 and can be done by mail or at reston.org.

More Stories
Retired Police Detective Takes Out Intruder After Being Awakened by Break-InReston Town Center Merchants: Paid Parking is ‘Tearing the Fabric of Who We Are’