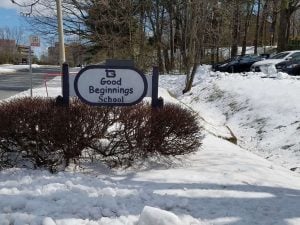 The site of a private school in Reston is facing a changing future.

Kensington Senior Development LLC is working with Fairfax County on an application to put an assisted-living facility at 11501 Sunrise Valley Drive, the current home of Good Beginnings School. Miaoling Lin, the school’s administrator, says the site is expected to operate as a school through at least the end of 2018.

The sale of the property to Kensington is contingent upon the plan’s approval by the county, Lin said. Meanwhile, a permit has been filed with Fairfax County for Oak Hill Montessori School to open at the site for a month in April.

“They are in between buildings, and we are shrinking, so we have room for them to use temporarily,” Lin said.

Lin said Good Beginnings will continue to operate at the site through June, after which a school called Mosaic will take over the facility.

Lin said some of the staff of Good Beginnings in Reston will be staying on site with Mosaic and some will be moving to the school’s Loudoun County campus in Stone Ridge. The school has a meeting scheduled for Thursday night to introduce Mosaic to parents interested in staying at the current site after June.