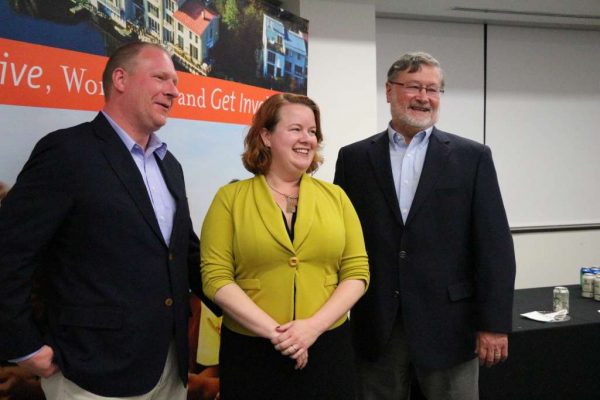 Eric Carr, John Mooney and Victoria White were announced Tuesday at Reston Association’s annual Members’ Meeting as the winners of the three contested races in the 2017 Reston Association Board of Directors election.

Carr won a six-person race for an At-Large seat on the board, defeating runner-up Ven Iyer by 117 votes in a race that saw 8,534 votes counted. The full breakdown of votes in the race:

“I think it’s clear from the turnout, the number of candidates and the number of votes, that this is a very impassioned community that got involved because of the changes that are happening here,” said Carr, who won a three-year term. “It’s a community that really embraced that idea that we need to take a new interest in how the organization is run, and I think that as you look at the results across the board, you see that.”

Mooney and White each won head-to-head matchups with their challengers. Mooney earned a two-year term as the North Point District representative with 1,384 votes to opponent Arlene Krieger‘s 1,069. He will serve the remaining two years of the term won in the 2016 election by Dannielle LaRosa, who stepped down.

“I’m very grateful to the voters, the members, for putting their trust in me,” Mooney said. “I hope to serve the board as best I can, and the Association as best I can. [There are] a lot of challenges, but I’m looking forward to it.”

“I’m looking forward to reminding the RA that the Hunters Woods/Dogwood District exists and reminding them that there are a lot of great community members who have probably not been getting involved because they haven’t been happy,” she said. “I’m really excited to remind the RA of that.”

David Bobzien, who was unopposed in the race for Apartment Owners’ representative, will also join the board for a three-year term.

“I’m sort of coming full circle, since I’ve lived here since 1975 and have been active in the community and was on the Planning Commission during some of the early development,” he said. “Now we’re looking at all this re-development, so I’m just looking to do my part and help out wherever I can.”

The four new board members will sit in on their first meeting tonight, beginning at 6:30 p.m. at RA Headquarters (12001 Sunrise Valley Drive). The agenda includes the election of officers, and discussion of committees and upcoming training. CEO Cate Fulkerson will also present the board with its 2017 calendar and strategic issues for consideration in the next three months.

In total, 4,918 ballots were tallied for the election — a voter turnout of about 18.97 percent. The North Point District had the highest percentage (24.79) of ballots returned; Hunters Woods/Dogwood (13.74 percent) had the lowest.