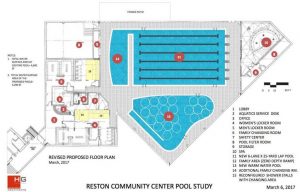 The finance committee of RCC’s Board of Governors will meet to discuss the final report from Hughes Group Architects regarding the possible renovation of the Terry L. Smith Aquatics Center. The proposal calls for using the existing footprint of the aquatics center for a six-lane, 25-yard lap pool with an attached family pool, as well as a separate warm-water therapy pool. Leila Gordon, RCC executive director, said she believes the project could cost up to $4 million.

Gordon said there are minor changes from the proposal made by Hughes Group at an early March public meeting, including the addition of “a bit more” deck space and widening of the lap pool to make a full turn on the outside lane.

Tax rates would not be affected by the project, Gordon emphasized. The projected costs “haven’t changed significantly” from the original estimate, she said, but those numbers are still being honed.

“Cost projections are being further refined at this point to include estimates for contingencies, general contractor cost and overhead/Architecture & Engineering,” she said. “But we are all cognizant that we don’t know what we will find once the current pool is demolished.”

Gordon said she expects core programs and services, as well as other critical capital projects, to occur as planned through FY19. However, she said the board will likely defer the establishment of two new programming areas being considered for FY19 — Therapeutic Recreation and Digital Media, Film and Video — until they have a more concrete figure on what the aquatics centers project will cost.

Scheduled replacement of the seats and projection screen at CenterStage may also be deferred, Gordon said.

“That totals $150,000 in the current profile of Capital Improvement/Maintenance Plan projects,” she said.

At the meeting, the committee will consider the presentation from Hughes Group, as well as the budget ramifications of the project. They are expected to make a recommendation to the full board regarding the project and the FY19 budget outline. The project could not be finalized until September at the earliest, Gordon said.

“Hughes Group will include a possible timeline in its presentation on Monday. As with all hypothetical timelines, it would be subject to significant change and shifts if conditions warrant as we move along in our process,” she said. “Currently, our desire is to time the beginning of a construction period with the opening of the summer pools in Reston in summer of 2018.”

Monday’s meeting is scheduled for a 6:30 p.m. start at Reston Community Center’s Hunters Woods location, 2310 Colts Neck Road. Anyone who wishes to attend is asked to RSVP to [email protected]. Anyone who is unable to attend but would like to submit written comments can do so to the same email address, being sure to include their full name and address with the statement.