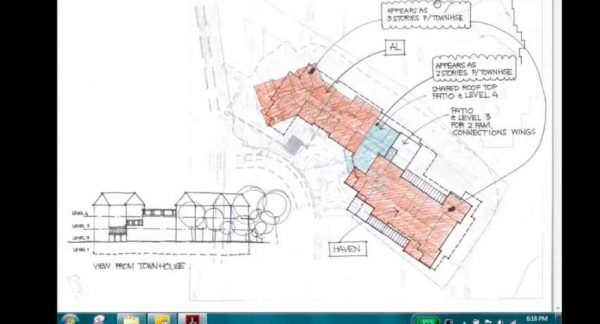 In a work session Tuesday (video), Reston’s Design Review Board and Kensington Senior Development made progress on the latter’s plan to put a 91-unit assisted-living facility at 11501 Sunrise Valley Drive.

A re-worked sketch for the proposed facility presented to the DRB at the session pushes the building farther away from nearby townhouses on Approach Lane, part of the Wethersfield Cluster. Where previous proposals had the building within 50 feet of the nearest residence, the new configuration leaves about 80 feet.

Previous designs for the proposal featured as many as five stories.

“This seems to me to be progress,” said Richard Newlon, DRB vice chair, who was very critical of previous plans. “I think this is going in a direction that is going to be just better.”

The facility would be at the site of the current Good Beginnings School. The property has not yet been sold, with the deal contingent upon the plan’s approval.

Several residents of the Wethersfield Cluster spoke during the session, expressing their concerns about lowered property values, privacy and architectural compatibility.

“The sentiment of the community is that the mass and height of this building is inappropriate at this location so close to a residential community,” said Stephen Cerny, president of the Cluster Association.

DRB members remained skeptical of how the facility would be viewed from Approach Lane and from the adjacent Sunrise Valley Convenience Center. They implored the developer to bring more detailed exhibits to future meetings to address those issues.

While DRB was happy with the effort to move the building farther away from the nearby townhouses, retaining more tree buffer in the process, they asked the developer to explore whether inching even closer to the Sunrise Valley Drive side of the property would be possible.