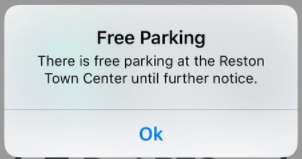 Social media users reported earlier today that the ParkRTC app at Reston Town Center was not charging, but Boston Properties says the situation has been handled and everything is back to normal.

The app read “There is free parking at the Reston Town Center until further notice” when users attempted to begin their parking session. Angie Goff, news anchor for NBC Washington, first alerted us to the situation in a tweet she sent to her more than 54,000 followers at about 1:20 p.m.

Parking is always FREE for our guests in #Reston but today the parking app OFF -no validation is needed! Stop in for #HappyHour at 3. pic.twitter.com/h42nHFbcbT

Kathy Walsh, spokesperson on behalf of Boston Properties, told Reston Now just before 2 p.m., though, that the “technical issues” had been fixed.

“Apparently there were some technical issues with the parking system this afternoon that have since been resolved and normal parking rates are in effect,” Walsh said. “Parking actually was free while that message was displaying.”